One popular hobby of those interested in discovering hints of Apple's future iOS devices has been the examination of various configuration files in each beta and public version of iOS for new entries referring to future iOS devices.

While the references provide essentially no information on the new devices themselves, as they simply appear in the form of "iPhone4,1" for what ultimately became the iPhone 4S as one example, they are carefully watched as hints of what devices Apple is likely to be testing with the software and perhaps how many variations of an upcoming device there might be. 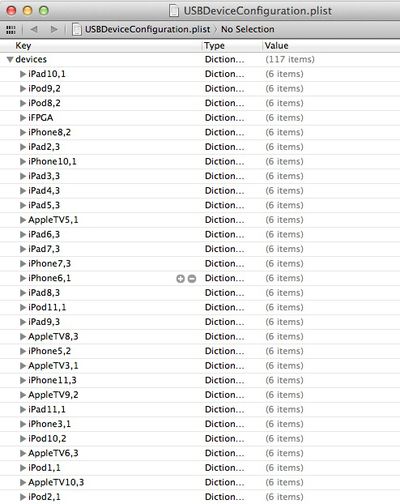 One file in particular, USBDeviceConfiguration.plist, had formerly listed about two dozen different device variants. As discovered by 9to5Mac's Mark Gurman, that list has now ballooned to well over 100 such entries as Apple has seeded it with dozens of new fake references to such future products as "iPad10,1", "iPhone11,3", "iPod11,1", and "AppleTV8,3".

The change is likely to make it more difficult to detect new additions, as the new entries will serve as placeholders until Apple quietly begins using the software on its latest devices under development.

Update: As noted by @chronic, the change does not shut out examination of the evidence entirely, as unaltered listings are still visible in other locations. Apple also apparently began adding the fake references in the first iOS 5.1 beta, but only with beta 2 did they make it into the closely-watched USBDeviceConfiguration.plist file.

Thank you Apple. Continue to fill your configuration files useless data, eating up precious space on my devices.


I'm pretty sure all this information amounts to about 20 kb. :rolleyes:
Score: 31 Votes (Like | Disagree)

gmcalpin
I've wondered why they didn't do this before, every time one of these references was discovered.
Score: 24 Votes (Like | Disagree)

ChrisA
Who would have thought of hiding trees in a forest?
Score: 21 Votes (Like | Disagree)

Looks like Apple is going Android manufacturers' style by crapping out devices a week after another.


You really think apple didn't ever work on next generation devices before current generations were released? Contrary to popular belief, development doesn't begin a month before the announcement.
Score: 17 Votes (Like | Disagree)

Small White Car
Everyone knows there will be a new iPhone and new iPad every year. No big deal. Nobody cares.

I take this change as evidence that some new un-known product (TV?) is coming. Something like that would be very obvious under the old system.
Score: 15 Votes (Like | Disagree)
Read All Comments

Saturday May 21, 2022 9:00 am PDT by Hartley Charlton
With around four months to go before Apple is expected to unveil the iPhone 14 lineup, the overwhelming majority of rumors related to the new devices so far have focused on the iPhone 14 Pro, rather than the standard iPhone 14 – leading to questions about how different the iPhone 14 will actually be from its predecessor, the iPhone 13. The iPhone 14 Pro and iPhone 14 Pro Max are expected...
Read Full Article • 244 comments