Next Generation iPhone (5,1) and iPad Also Referenced in iOS 5.1 Beta 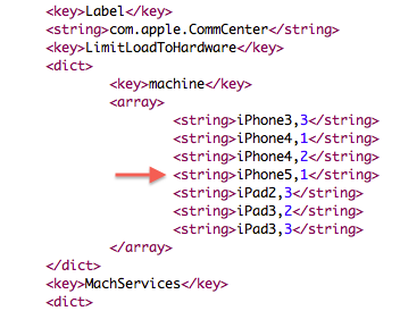 iOS 5.1 Beta seems to be a treasure trove of product ids with the exposure of the iPad 2,4 and the J33 codename for the next generation Apple TV. The latest part number to come from iOS 5.1 is the iPhone 5,1 as noted by both @FilippoBiga and 9to5Mac.

The progression of iPhone product numbers are as follows:

iPhone5,1 clearly represents the next generation iPhone that Apple is working on. Rumors have suggested the next iPhone will carry a 4" screen rather than the usual 3.5" screen found in all previous iPhone models. The new iPhone is also believed to have been prototyped with a tapering design in the past, though the most recent rumors suggest the actual release iPhone will not resemble the mockups.

The iPad3,2 reference has been previously seen though iPad3,3 appears new.

malias4
oh come on we all know its coming a new phone but prob in 12 months so whats the hurry !
Score: 10 Votes (Like | Disagree)

1goodidea
Quick. Please release, it's been 3 weeks since my last Apple purchase.
Score: 8 Votes (Like | Disagree)

shartypants
Apple engineers should put in iPhone7,2 just to screw with us :D
Score: 8 Votes (Like | Disagree)

For the idiots wanting a 5" screen, take your asses over to the impractical world of Android.
Score: 7 Votes (Like | Disagree)

Are u kidding???? No thanks


X2..hell no. 4" is plenty big enough. Any bigger and you need cargo pockets to carry it...or a backpack. These gigantic phones with 4.5"+ screens are ridiculous. Why not just add cellular capabilities to an iPad and whip that bad boy out and hold it up to your head?
Score: 7 Votes (Like | Disagree)
Read All Comments