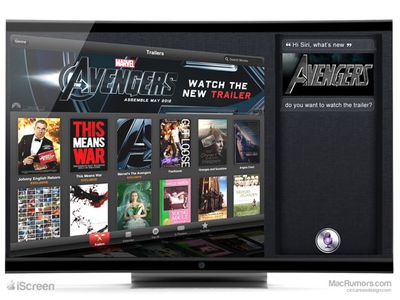 Apple iScreen concept by Ciccarese Design
Businessweek reports on the movement towards voice-activated TV remotes in the coming year. The move seems triggered by Apple's plans to enter the TV market in the near future. Steve Jobs said that he had finally "cracked it", referring to the TV user interface. Most believe that this revelation relates to Apple's Siri voice recognition system, and the industry is on the move:

Whether the rumors are true that Apple is planning to release a TV set by 2013, Siri-like voice recognition is headed for the living room. Microsoft (MSFT) is already there, via its Xbox 360 game console, and Comcast (CMCSA), Samsung Electronics (SHCAY), LG, and Sharp are working on voice-enabled features for TV sets, set-top boxes, and related products.

Businessweek suggests an voice command as simple as "Record the next episode of Modern Family" as a much needed improvement over the current solution. Jakob Nielsen of Nielsen Norman Group goes on to say "Anything would be better than what we have now."

Upcoming remote devices are said to look more like iPhones than traditional remotes, with possibly a single physical button to activate the microphone. Others are working to simply embed microphones around the living room and eliminating a physical remote altogether. Nuance suggests that 5% of TVs could be voice controlled by Christmas 2012.

We've previously reported about competitors "scrambling" to identify what an Apple television set might look like. The lead up is reminiscent to the large number of tablet plans from competitors in the months leading up to the original iPad launch.

ECUpirate44
TV companies are already scrambling because of the rumored "iTV" that we know nothing about.
Score: 9 Votes (Like | Disagree)

The only problem with voice recognition on TVs is that it could interfere when commanding volume. If the TV is too loud, then the mic may pick that up. "Turn volume down to ten." "Did you say, 'buy a Snuggie?'"


Why do people keep thinking this?

Obviously they're gonna add a trigger where the TV volume will go mute when Siri is on.
Score: 7 Votes (Like | Disagree)

HobeSoundDarryl
Relative to all this "Siri can't hear over the TV volume" nonsense, why not just program the system to ignore the audio stream for the television programming so that Siri can't hear it at all (like noise canceling headphones, but much better since the "noise" would be very specific and precise)? Then, Siri would just hear the sounds in the room that are NOT playing through the TV.
Score: 6 Votes (Like | Disagree)

longofest
In my opinion, in order for Apple's television solution to really be a revolutionary product, it will have to do more than just have a Siri-remote (http://www.techperfect.net/2011/11/the-challenge-facing-an-apple-television/). That would be a nice feature, but remember that most televisions don't live alone in an isolated environment - they are connected to stereos that have their own complicated "universal" remotes.

In order to really crack the TV - and therefore the living room - Apple needs to have their Siri remote not only be able to command the TV, but all of the other devices that you have. Maybe they'd use Airplay? Maybe they'd use HDMI control?

The only problem with voice recognition on TVs is that it could interfere when commanding volume. If the TV is too loud, then the mic may pick that up. "Turn volume down to ten." "Did you say, 'buy a Snuggie?'"


Saying this is like saying that playing music from a phone is a bad idea because it would interfere with phone calls.
Score: 6 Votes (Like | Disagree)

MacsRgr8
Apple must be laughing its socks off!

A statement in a biography claiming to "have cracked it" and the whole TV industry is adjusting their 2012 goals to compete with it...

Thursday January 27, 2022 10:54 am PST by Juli Clover
The iOS 15.4 beta that was introduced today added a new feature designed to allow Face ID to be used with a mask and without an Apple Watch for authentication. Apple says that the feature can "recognize the unique features around the eye" for authentication purposes. If you opt to use this feature during setup, you will need to rescan your face for Face ID. From there, Face ID will be able...
Read Full Article • 115 comments