Popular social magazine service Flipboard today announced the release of a universal version of its previous iPad app, adding compatibility for the iPhone and iPod touch. Flipboard allows users to collect information from various sources including social networks, news sites, and blogs, presenting the content in an easy-to-browse magazine style. Highlights of the new universal app include:

- Social Networks: Enjoy everything in one place from Facebook, Twitter, LinkedIn, Tumblr, Instagram, Google Reader, Flickr and 500px.
- Cover Stories: Get a quick update on interesting stories and photos from all your social networks and favorite Flipboard content.
Flipboard Accounts: Access to all the favorite content and social networks you saved on the iPad edition of Flipboard with a Flipboard Account.
- Content Guide: Browse recommended reading. Use + to add to your Flipboard.
- Search Bar: Find social conversations, posts and feeds from any person or publication and on any topic. For example, search “Cinemagraph” and get results from Tumblr, Facebook, Twitter, Flickr, RSS and Instagram.
- Share Everywhere: Just one tap to share, like or comment to add to the conversation on the social network an item was posted to.
- Fast Flip: Scan through pages as quickly as you can with just a flick of a thumb.
- Read later: Use Instapaper or Read It Later to mark stories you want to save. 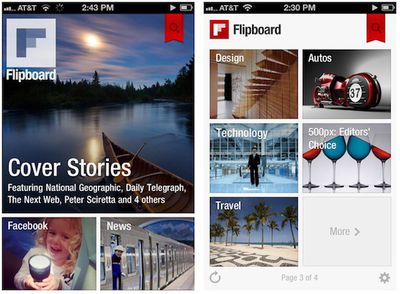 Flipboard has proven popular with other users as well, with The Next Web noting that Flipboard today announced total downloads for the iPad version of 4.5 million, making the app installed on more 10% of all iPads. The company obviously believes that the new universal app will help bring Flipboard to an even larger number of users, while also offering current users of the iPad version more flexibility to also access their content on their smaller devices.

Update: As Flipboard acknowledges in a Tweet, the service is currently experiencing difficulties due to high traffic from the iPhone launch.

Due to high demand, our service is currently down, we are working to resolve the issue as soon as possible. Thank you for your patience.

Currently it's not building my clipboard.. guessing too many people doing it.

However, wouldn't it be awesome if Apple bought out Flipboard (or similar) to actually build into the iOS?

Basically no one uses the search when you swipe right on the home screen. There would be an awesome location to put it. This would compete against widgets on Android in a cool way.

This actually wouldn't be too shabby. I approve.
Score: 4 Votes (Like | Disagree)

GollumBoy
Currently it's not building my clipboard.. guessing too many people doing it.

However, wouldn't it be awesome if Apple bought out Flipboard (or similar) to actually build into the iOS?

Basically no one uses the search when you swipe right on the home screen. There would be an awesome location to put it. This would compete against widgets on Android in a cool way.
Score: 4 Votes (Like | Disagree)

kolax
They should have built in some sort of notifier to alert users who don't use tech blogs that "servers busy, try again in a few hours".


The design reminds me of the new Windows phone interface, except the content doesn't run off the screen.
Score: 3 Votes (Like | Disagree)

Servers are to crowded right now?
I can't make an account it times out.

Other people are reporting this too.
:/


Yep, doesn't work at all right now. Shame. Suppose Schiller should have checked to see if they had adequate server performance before endorsing anything, eh?
Score: 3 Votes (Like | Disagree)