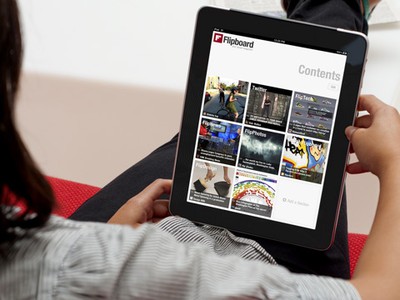 Designed from the ground up for iPad, Flipboard creates a magazine out of a users social content. Simply launch Flipboard and flip open the cover to get started. From the Table of Contents readers can view their sections and personalize the magazine.

The content of Flipboard is populated based on the user's own accounts on Twitter and Facebook, as well as their other interests. It's also presented in a very iPad-friendly interface as shown in this promo video:


The free iPad application does a good job collecting data and presenting it in magazine format. It's a neat concept that seems to fit into the sitting-on-the-couch lifestyle of iPad media consumption. Early usage has been a bit spotty with connection errors, though we are assuming that's related to high early demand. Flipboard is a free download and requires an iPad.
[ 143 comments ]

Sunday May 16, 2021 2:39 pm PDT by Eric Slivka
The Browse tab in the Music app across Apple's platforms has started displaying a prominent teaser hinting at an upcoming major announcement for Apple Music. Under the heading "Coming soon," the headline says "Get ready – music is about to change forever." An accompanying "Tune-In Video" simply shows an animated Apple Music logo. Rumors have indicated that Apple is preparing to launch a...
Read Full Article • 103 comments