There have been several bits of App Store-related news over the past day, so here is a roundup of some of the more prominent items:

- iPad Swiping: As noted by MacStories, Apple has improved navigation of the iPad App Store, now allowing users to swipe between pages of featured apps and other listings. Users had previously needed to tap navigation arrows to move between pages, but moving to swipe-based navigation makes for a more natural interface and faster page changes. 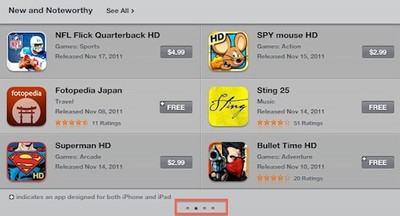 - Yuan Now Accepted in China: Penn Olson reports that Apple is now accepting renminbi, the local Chinese currency, for App Store purchases in China. With the new pricing in yuan, Chinese customers will no longer be required to make purchases funded by credit cards in U.S. dollars. Apple has also begun accepting payment via local bank cards, with customers able to top-up their iTunes Store accounts with prepaid amounts from their bank accounts to fund their App Store purchases.

- Kindle Fire Added to 'Amazon Appstore' Lawsuit: Despite the fact that Apple has not yet won a trademark registration on the term "App Store", it sued Amazon back in March over the company's use of the term in its Amazon Appstore for Android. A judge declined to issue a preliminary injunction against Amazon in July, and the full trial is not set to take place until October 2012.

With Amazon having just launched its new Kindle Fire tablet, Apple has expanded its lawsuit to address the fact that Amazon is promoting its "Appstore" in conjunction with the device. As reported by paidContent, Apple has also included new claims of false advertising in the lawsuit.

Apple's revised complaint is intended to show that Amazon has continued to use the "Appstore" term even in the face of Apple's prior claims of trademark infringement, hoping to establish a pattern of willful misrepresentation on Amazon's part leading to customer confusion over the app marketplaces. The courts and trademark examiners have yet to look favorably upon Apple's claims regarding "App Store" being an allowable trademark for the company, but it is clear that Apple is still trying to press its positions.

GenesisST
Call me picky, but shouldn't the app store updates and the lawsuit thing be separated as two news items?
Score: 10 Votes (Like | Disagree)

The term app has been around a lot longer than Apple has, give it up.

I don't understand people who think that App Store is generic.

What do you think if you walked into a CVS Store and saw a sign "Winter is here! Get your kleenex and bounty stocked up!"? Then you walk to the isle to find CVS branded paper towels and tissue papers looking like those brands but not them at all.

I don't think that's fair, and CVS does this all the time. There's an expensive bottle of shampoo on the shelve and right next to it is CVS' one looking exactly the same, same colors, shapes and design, just a slightly different name.


This is just a free ride for Amazon, Google and Microsoft and they know it.


Just going to point out in for Kleenex and Bounty the companies made a point of providing a generic term for their product and using that generic term when describing others.

Apple on the other hand failed to do both those. They used the term app store generically multiple times. You have keynots from their CEO Steve Jobs using "app store" to describe Google's Market, Blackberry's Appword and Microsoft's Marketplace.
That kind of kills a good chunk of Apple's arguments of the term is not generic. It hard to argue that when ones own CEO used it that way in public keynotts. This does not include it being used by the press that way time and time again.

Even if Apple somehow wins the trademark they still have to win again in court that the term is not generic. Getting the trademark is going to be the easier for the two battles for Apple. Amazon only has to win one of them. Apple has to win them both and both are going to be a huge up hill battle for Apple.
Score: 5 Votes (Like | Disagree)

Before the first iPhone "App Store" was NOT a generic term. It was hardly used if at all. When the first iPhone came out and Apple pushed the term as their store and the "App" branding then it became a term everyone knew. Then of course it feels generic, but really no - its not generic at all. Its a common phrase NOW but pre-iPhone most people had never heard it used.


Yes, it was. "App Store" existed on a number of mobile phones, pda's, etc long before the iPhone was even conceived.

"App" has been a known word for "Application" for years...Apple did not invent the word.
Score: 5 Votes (Like | Disagree)

BJMRamage
not to get sidetracked here but this is part of the original post:

I LOVE the new App Store Swiping. I was annoyed with this and told my wife about it last week (just got an iPad on Halloween) and said, "with all the swiping capabilities on the iPad I wonder why I have to hit that tiny button rather than a swipe."

the full trial is not set to take place until October 2012.

Until then, Apple and Amazon are free to pursue each other.

Apple is looking for some form of injunction or penalty against Amazon, though on the trademark grounds Apple hasn't got one yet, and probably never will.

I hope Apple drops the trademark issue. It's clear, at least from a lay perspective, that that's a lost cause.

They might have chance in the "willful misrepresentation" line, however. Probably plenty of fodder there.

Hopefully Amazon will be a little brighter in the courtroom.


I am as shocked as I am sure LTD will be when I say that I agree. I think this is a lost cause and a waste of time and resources. I don't begrudge Apple for trying - but I think the likelihood of success is nil.
Score: 5 Votes (Like | Disagree)
Read All Comments