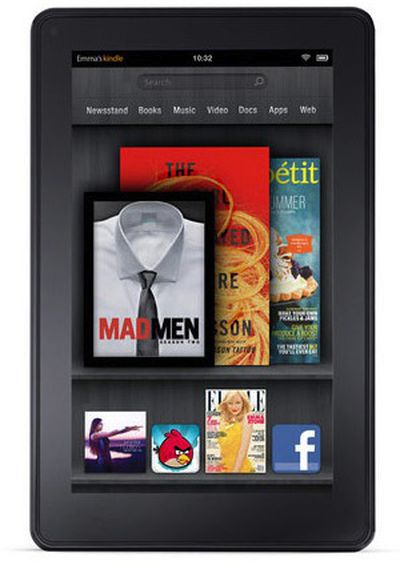 Amazon's Kindle Fire (Source: This is my next...)
Bloomberg reports that Amazon is preparing to unveil its new 7-inch Android-based tablet, with the "Kindle Fire" device carrying an unexpectedly low price tag of $199. Amazon will be introducing the tablet at its media event set to begin in just a few minutes.

The Kindle Fire will have a 7-inch display and sell for $199, compared with $499 for Apple’s cheapest iPad, Amazon executives said. The device, a souped-up version of the Kindle electronic-book reader, will run on Google Inc.’s Android software, the Seattle-based company said.

Chief Executive Officer Jeff Bezos is betting he can leverage Amazon’s dominance in e-commerce to pose a real challenge to Apple’s iPad, after tablets from rivals such as Hewlett-Packard Co. and Research In Motion Ltd. have fallen short.

Previous rumors had suggested that Amazon would price the Kindle Fire at $249, although sources had hedged in recent days that the device might come in at $299.

The Kindle Fire offers Wi-Fi connectivity and a 30-day trial of Amazon Prime, the company's $79/year service that offers streaming video and free two-day shipping on most items purchased through Amazon. The tablet does not offer 3G connectivity, camera, or microphone.

In an extensive profile of Amazon, Bloomberg Businessweek notes that Amazon will be introducing a "crop" of new Kindle devices beginning at $79.

New lineup of basic Kindle devices (Source: This is my next...)
- Amazon CEO Jeff Bezos has shown off three new Kindle models, starting with a new touch-capable version known as the Kindle Touch and priced at $99. A 3G-capable version with lifetime 3G service in over 100 countries is priced at $149. Finally, Bezos has shown off the low-end $79 Kindle, which forgoes touch input and relies on physical buttons for input.

- Bezos introducing the Kindle Fire: 7-inch IPS display, dual-core processor, 14.6 ounces. Hub for integrating Amazon Kindle, Prime, Instant Video, MP3, Appstore, and Web Services offerings on a single platform. All content is backed up to the cloud...wireless and in the background. Whispersync now works for books, movies, and TV shows, allowing users to pick up where they left off when they switch devices.

Kindle Fire features summary (Source: This is my next...)

gpat
Make a $199 tablet that doesn't suck and everybody wins.
Score: 35 Votes (Like | Disagree)

samcraig
I made popcorn. Not only can't I wait to see what Amazon has come up with - I just know the comments on this message board are going to be fantastic (especially by those who are so quick to review something they haven't used and who have to slam anything non-Apple)
Score: 32 Votes (Like | Disagree)


whats that?
Score: 31 Votes (Like | Disagree)
Read All Comments