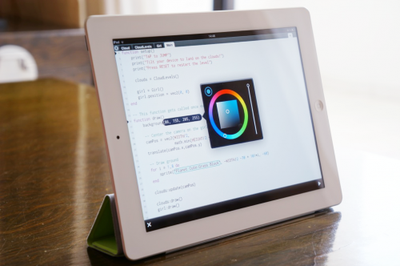 iOS developers TwoLivesLeft have just released an interesting new app called Codify, which brings touch based programming to the iPad.

The app allows users to create their own programs using the Lua programming language by typing code directly on your iPad. Also included are various assets and programming examples to be used in your creations:


Apps such as Codify are now possible since Apple relaxed their App Store rules that originally prohibited interpreted code in iOS apps. Apple now does allow for interpreted code to be run in-app, but still prohibits the download of such code. As noted by TouchArcade, this means that anything you create in Codify can't be exported (or imported).

I've heard more than a few developers attempting to create similar tools for the iPad, but all of them have hit various roadblocks in the Apple approval process because they all (in one way or another) allowed you to get code and assets onto the device and execute it. Codify sidesteps this by coming with a wide variety of assets, but unfortunately all of your creations will be trapped on your own device.

The developer has already submitted an update that allows sharing, but the developer isn't certain if Apple will allow it.

Due to the limited nature of the environment, the tool is mostly useful for experimentation and prototyping, as you won't be able to send your creations to anyone else. Still, it's an interesting idea and pushes the iPad into more content creation areas.

wordoflife
The apps available on the App store keep getting more advanced every day. Can't wait to get my iPad
Score: 11 Votes (Like | Disagree)

arn
Be nice if someone ported Logo to the iPad.

What do kids learn to program on these days?

mrsir2009
Since you can't get your creations off the device I guess this'll be great for casual programming, but the actual stuff will still be done on computers :cool:
Score: 6 Votes (Like | Disagree)

IMO, Apple's standard for the app store is pretty darn sensible: they require that all of the code be submitted with the app, and that code can't be changed at runtime.

I don't quite know what "artificial" would mean in this context. Their standards are in place to minimize the odds that a virus could corrupt a program or the entire iOS device. Limiting apps to the code submitted by the dev sounds like a good common-sense standard.

The Apple II maxed out at 48KB. Making anything run there required all sorts of Woznikian hacks.

We no longer need to have our computers run in such a promiscuous mode; it is a step forward.

Taking away the ability to program a computer is NOT a step forward. The iPad represents about 2/3rds of the vision Alan Kay had for the future of computers back when he did his groundbreaking work at Xerox Parc. Making programming pervasively accessible is the other 1/3rd, and done right, it may be the most powerful part.

I bought a copy of Codify as a show of support that Apple should allow apps that let people program on the iPad.
Score: 4 Votes (Like | Disagree)

Since you can't get your creations off the device I guess this'll be great for casual programming,

Just the other day there were people around here bleating that the iPad isn't for content creation and that it can't be done on the iPad.

Then we're shown how to do it a matter of days later. What's next?

More perspective on the Post-PC Era.
Score: 4 Votes (Like | Disagree)

Quick answer: not awesome at all. Unless you mean touching a real keyboard, with real tactile input for fast typing, and fewer errors.

I realize that that a BT keyboard can be used, but until I can attach a few 30" monitors and ergo mice to my iPad, it is still a far cry from useful for programming.

I'd hate to see you about 15-20 years ago when we were still programming from a shell with no autocomplete, popup menus to choose functions, no mouse support let alone touch all on a 14" CRT.

Kids are too spoiled nowadays.
Score: 3 Votes (Like | Disagree)
Read All Comments

Thursday September 29, 2022 12:38 pm PDT by Juli Clover
Tony Blevins, Apple's vice president of procurement, is set to depart the company after he made a crude comment about his profession in a recent TikTok video, reports Bloomberg. Blevins was in a video by TikTok creator Daniel Mac, who was doing a series on the jobs of people he spotted with expensive cars. After seeing Blevins in an expensive Mercedes-Benz SLR McLaren, Mac asked Blevins what ...
Read Full Article • 317 comments