Apple to Stick with Samsung for A6 Chip Production After All? 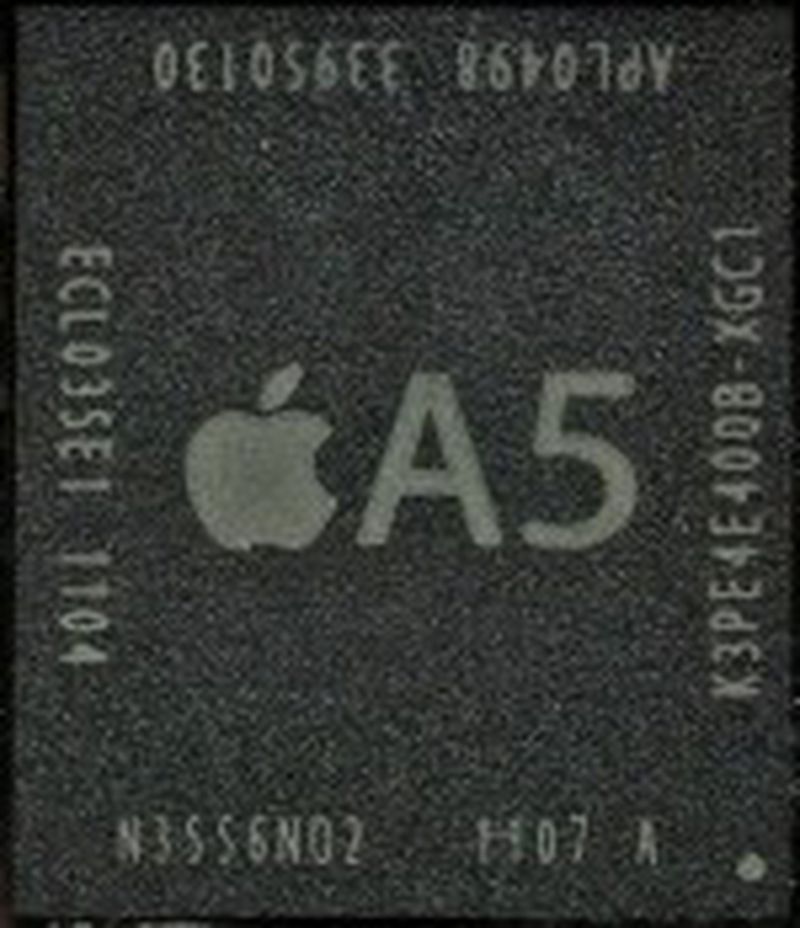 Last month, word surfaced that Apple had signed on with Taiwan Semiconductor Manufacturing Company (TSMC) for production of the next-generation A6 and A7 chips destined for future iOS devices. Samsung has been Apple's manufacturing partner for the A4 and A5 chips, but several reports have been claiming that Apple has been trying to shift to TSMC in part because of strained relations between Apple and Samsung over intellectual property issues.

The Korea Times now reports that Apple will indeed primarily be sticking with Samsung for A6 production.

"Apple has been in talks with Samsung over shipment of its A6 quad-core mobile processor (AP) chips to be used in the next iPhone. It appears that Apple clearly has concluded that Samsung remains a critical business partner," an executive from an Apple parts supplier based in Korea said on condition of anonymity.

He said that Samsung has been increasing the output of the Apple-designed A6 chips in its manufacturing plant in Austin, Texas.

The apparent shift back to Samsung for the A6 is said to be tied to TSMC having issues with its production process, with Apple understandably requiring a stable component supplier as it looks toward its next-generation iOS devices.

The report also touches on the next-generation iPhone even as the iPhone 4S is only just hitting the market, reviving claims of a larger-screened "iPhone 5" design with a 4-inch display carrying the same resolution as the current iPhone.

Warbrain
This isn't surprising. Apple was probably looking for a little bit more freedom but the way Samsung is built and operated the lawsuits with the mobile side don't really affect the chip side.
Rating: 8 Votes

Apple should spend a billion dollars (of it's $70+ billion of cash on hand) and build its own chip plant here in the US, and be done with all of this back and forth.

Maybe a design/software company should toss a few billion at graphics chip production and cpu production too!

I'm sure they would have no problem keeping pace with the industry leaders in areas they have no expertise (Intel, Nvidia, ATI/AMD)....

While they are at it, they should just spend a little more to make 4G chips and their own telecomm networks. They are Apple right? The best at everything!
Rating: 7 Votes

ThunderSkunk
wtf sometimes on this board. If your world is changed by the difference of a 3.8" screen to a 4" screen on your telephone... you must live in a very very small world.
Rating: 6 Votes

Apple is larger than Samsung, and Is their biggest customer, so absolutely.


Apple is not larger than Samsung. It has higher market capitalization but Samsung is bigger in many categories. Quote (http://www.dailyfinance.com/2011/01/12/samsung-apple-rival-ipad-galaxy-tab/):


Samsung, though, is already bigger than Apple in terms of revenue. It's forecast to report $137 billion in 2010 revenue, more than double the $65 billion Apple took in during its most recent fiscal year.

Any possibility that Samsung, who pretty much owns south Korea, could have seeded this story to the press? I find the source rather suspect.

In related news, PrisonPlanet reports that Samsung's senior counsel is Elvis, operating under direct orders from space aliens (and not the good ones, but the grays!)
Rating: 4 Votes

When will people let the "bigger screen" rumor die? There's a reason why it is the size it is and it shouldn't change—this is why (http://dcurt.is/2011/10/03/3-point-5-inches/). It's not a tablet and bigger isn't always better.


That guy must have rather small hands. Not that there's anything wrong with that.
Rating: 4 Votes

Be careful. Many people "actually" believe the Galaxy II S' Exynos was a Samsung Design. And, that Apple likes to look at internal hardware for license violations, not blatant design architecture rip off.

Nice to see some people in here get Samsung Mobile. ;)


A truly sad attempt at feeding the sheep something to eat up. Does it really hurt you that much to know Samsung are world leader in semiconductor. So upset at the fact that Apple just can't leave them. Does the news they are sticking with Samsung crush your theory that Apple don't need Samsung, and that Samsung need Apple. You know, that theory you blind follower like to believe. Apple is not a true OEM, Samsung is. Just accept the fact, Apple will always have a dependency on a supplier. And that supplier would be that company you blind followers like to call a copy cat who makes cheap plastic phones (that can withstand more of a beating than your precious iPhone.)
Rating: 3 Votes

And Apple will continue the lawsuits against Samsung on the mobile front, and Samsung will just roll over and continue to serve Apple's needs.


Sounds more to me like Apple is running back to Samsung because the grass wasn't greener.
Rating: 3 Votes

Apple should spend a billion dollars (of it's $70+ billion of cash on hand) and build its own chip plant here in the US, and be done with all of this back and forth.


Tell your representatives to work to reduce regulation, slash taxes, and rein in the unions, then maybe.
Rating: 3 Votes

I totally agree. People will not let this rumor nor the iPhone 5 die.