Many readers are now enjoying some of the quirkier responses coming from Siri, Apple's intelligent assistant built into the iPhone 4S. The Wall Street Journal spoke with one of the co-founders of the original Siri and how they approached instilling Siri with personality:

"There were many conversations within the team about whether it should be gender neutral" or "should have an 'attitude,' " said Mr. Winarsky, who didn't go to Apple, and still works at SRI. The result, before the software was bought by Apple, was "occasionally a light attitude," he said.

According to a different person who actually worked at Apple on the Siri project, Apple focused on keeping Siri's personality "friendly and humble -- but also with an edge". According to their source, they were thinking "How would we want a person to respond?" while developing the software.

The Siri group is said to be one of the largest software teams at Apple and the crafted responses are to try to forge an emotional tie to customers. MacRumors forum readers are posting their favorite responses in this discussion thread.

Siri launched as an exclusive feature for the iPhone 4S and allows users to speak questions and requests directly to their iPhone.

arn
from the easter eggs thread 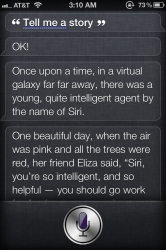 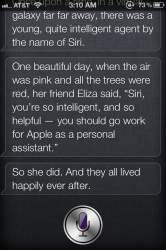 HelveticaNeue
I have been really impressed with Siri. Last night Siri blew me away when I said "Add oatmeal to my groceries note". I felt certain Siri wouldn't have any idea what I meant. A second later Siri says okay and pops up my already existing grocery list in notes and adds Oatmeal on a new line at the end of the list ... I was stunned.
Score: 18 Votes (Like | Disagree)

They should merge Siri with Cleverbot.


No, they definitely shouldn't. Despite Cleverbot's name, it's actually dumb as a brick.
Score: 13 Votes (Like | Disagree) 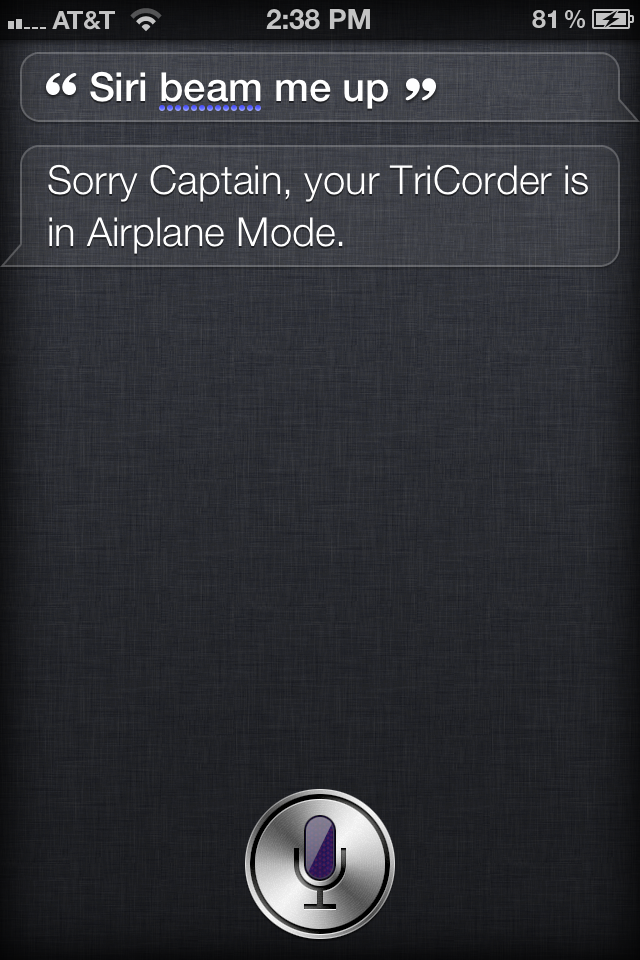 Yes, but it's not what they use to contact the ship. That would be a communicator (TOS) or combadge (TNG). Tricorders are used to scan things.


Yeah, but tricorders don't have "airplane mode" either. It was a joke. If siri said "your communicator is in airplane mode" that would be way too generic a tech term and some people would actually get confused and think siri was actually telling them an error message. When you're making a joke for *extremely* broad audiences in a technical context then you have to make sure that your joke can't possibly be misinterpreted.
Score: 12 Votes (Like | Disagree)

My 7 year old daughter started saying that Siri is "kind of rude" after Siri told her "I don't do knock knock jokes". :D
Score: 10 Votes (Like | Disagree)
Read All Comments