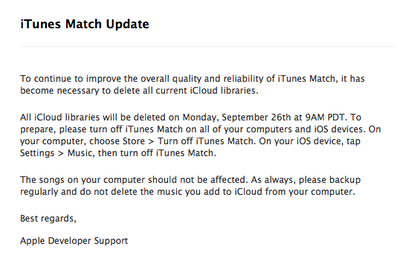 Apple has sent an email to developers notifying them that their iCloud libraries housing iTunes Match data will be wiped on Monday, September 26th at 9AM PDT. The reason for the wipe is to "improve the overall quality and reliability" of the service. The news comes after Apple wiped all the iCloud backup data on Thursday, September 22nd.

We believe these are preparations for Apple to launch the final Golden Master (GM) version of iOS 5. Apple had been planning to declare iOS 5 as GM on Friday, September 23rd, though we haven't heard confirmation yet if that had actually taken place. Also on schedule was to start installing iOS 5 GM onto new devices in their factories on Monday, September 26th. Assuming all this has remained on schedule, we expect the final GM version of iOS 5 to be release to developers as early as next week.

iCloud and iTunes Match services have been running in developer beta for the last couple of months. The public release is scheduled for "Fall", and it seems likely Apple will announce the ship date at their rumored October 4th media event.

This is a private beta as very distinct from a public beta.

The deletion is to avoid problems in the future, as some of the data stores might have changed during the beta development.

This. A million times over this.

The developer program is just that...a program for developers. I almost wish there was a requirement to prove you are actively developing for the platform to keep your membership.
Score: 14 Votes (Like | Disagree)

I have this same feeling. Apple understands how to make so many amazing products but they really fall down when it comes to web services for some reason.


This is a private beta as very distinct from a public beta.

The deletion is to avoid problems in the future, as some of the data stores might have changed during the beta development.
Score: 7 Votes (Like | Disagree)

Eduardo1971
These next several weeks are going to seem long...
Score: 7 Votes (Like | Disagree)

This. A million times over this.

The developer program is just that...a program for developers. I almost wish there was a requirement to prove you are actively developing for the platform to keep your membership.


The issue is that the vast majority are using the program as part of a "buy your UDID a copy of iOS5". None of those people actively report bugs, they just complain and submit negative app reviews.
Score: 6 Votes (Like | Disagree)

I haven't seen Apple get Internet services right except for the iTunes Store (in its original form).

It seems problematic that Apple's idea of increasing the reliability and quality of a service is to delete all of users' server-side data. Like most of of us here, I'm not an expert on Internet services, not even a little bit. But it seems like betas usually grow into a mature product. Gmail didn't force users to delete all their e-mail as it grew. Other companies fail and fix. Apple tends to have a slash and burn mentality.

You know Tripod is still hosting some sites I created back in the late 90s? Apple has destroyed every Internet service offering it's offered when it came out with a new idea. eWorld, iTools, .Mac, MobileMe. I've paid for those except for iTools, and while I don't remember the details of what's about to happen with the iCloud transition (Apple seems to obfuscate that information), I am not trusting that my MobileMe gallery is going to be around or that my iDisk data won't disappear. I've lost enough e-mail through MobileMe to know it's possible at any time. And these are paid services. I never paid Tripod a dime, and it's still hosting the first web-sites I ever made.

As a layman, it seems to me it's a bad sign if you need a fresh start to mature a beta. I would love for Apple to prove me wrong.


Quite the rant, but this is very different. This is a brand new feature that they were very clear would be deleted near the end of the beta. Same thing with device backups on iCloud. it wasn't a surprise to anyone as they were telling devs from day one that stuff would be deleted as time went on.

I'm with you, I have lost stuff with MobileMe, too. Just be sure to judge appropriately.
Score: 5 Votes (Like | Disagree)

zama36
I just gotta ask the question. Am I in the minority? Never lost anything on iTools, .Mac or MobileMe. I even having over 10,000 emails in my inbox dating back to 2003 today.
Score: 4 Votes (Like | Disagree)
Read All Comments