Apple is making a strong push to open more retail stores as it heads into the final weekend of its fiscal year and makes preparations for the launch of the iPhone 5. In addition to the high-profile openings scheduled for Hong Kong and Shanghai that were disclosed earlier this week, Apple is opening five other new retail stores this weekend. 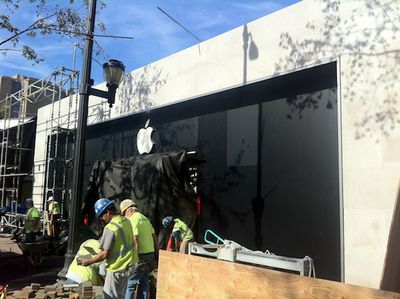 - Hornsby (Sydney, Australia area): Located to the northwest of Sydney itself, the new Hornsby store will be the sixth in the Sydney area and the 13th in Australia. The store is located within Westfield Hornsby, a major shopping center with over 300 retailers.

- Parly 2 (Paris, France): Located in Le Chesnay, a western suburb of Paris just to the north of Versailles, the new Parly 2 store is Apple's fifth in the Paris area and ninth in France.

- Centro Sicilia (Catania, Italy): Apple's first store on the island of Sicily, the new store is located in Catania, Sicily's second-largest city. The store is Apple's ninth in Italy.

Caliber26
I sure hope they're manufacturing enough next-generation iPhones to stock all of these stores.
Score: 3 Votes (Like | Disagree)


Typically a T-shirt with store name.
Score: 2 Votes (Like | Disagree)
Read All Comments