About six weeks ago, it was revealed that Apple had passed Nokia and held off Samsung to become the world's largest smartphone vendor as measured by shipments during the second quarter of 2011, even if Nokia reportedly held off Apple in sales to end users. 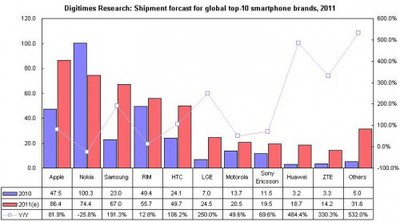 Digitimes Research now reports that it is projecting Apple to take the top spot among global smartphone vendors for the entire calendar year of 2011, leading the way with nearly 19% of the market at 86.4 million units. Apple is projected to easily top Nokia, whose shipments appear set to drop 25% to under 75 million.

Apple is expected to overtake Nokia as the top ranking vendor in terms of shipment volume in 2011, while Huawei Technologies will enjoy robust growth in shipments enabling the China-based company to close its gap with Sony Ericsson and Motorola.

Samsung's strong growth on the popularity of several of its Android-based handsets should see it leap over both HTC and Research in Motion, but will not yet be enough to catch either Nokia or Apple in full-year shipments.


About six weeks ago, it was revealed (https://www.macrumors.com/2011/07/29/apple-passes-nokia-and-holds-off-samsung-to-become-worlds-top-smartphone-vendor/) that Apple had passed Nokia and held off Samsung to become the world's largest smartphone vendor as measured by shipments during the second quarter of 2011, even if Nokia reportedly held off Apple (https://www.macrumors.com/2011/08/11/gartner-nokia-held-off-apple-in-smartphone-sales-in-2q-2011/) in sales to end users.

[/url]
Digitimes Research now reports (http://www.digitimes.com/news/a20110906PR202.html) that it is projecting Apple to take the top spot among global smartphone vendors for the entire calendar year of 2011, leading the way with nearly 19% of the market at 86.4 million units. Apple is projected to easily top Nokia, whose shipments appear set to drop 25% to under 75 million.Samsung's strong growth on the popularity of several of its Android-based handsets should see it leap over both HTC and Research in Motion, but will not yet be enough to catch either Nokia or Apple in full-year shipments.

I respect Apple not simply to seem cool or hip or something rubbish, but because what ever they do is well thought-out, successful, innovative, proper and not influenced by idiotic public demand. 4 years ago who would have said that Apple was to be the largest Smartphone manufacturer? I wouldn't. And to think they did this with 1 model!! HTC etc. have millions of models. That is why I respect Apple.

But but but android!

Sits back to watch the haters


Android what? That has as much relevance to this as taking a pet pencil to a chocolate convention would do!
Score: 4 Votes (Like | Disagree)

notabadname
Impressive. If not only because this is done with essentially one phone model, and not with all carriers even.
Score: 4 Votes (Like | Disagree)

Hopefully within a year or so the only phone on the market will be the iPhone. I hope that every person on earth buys one and that all other companies go the way of the dinosaur.


Well that's just silly. But of course you're being sarcastic. Honestly though, who are you lampooning? No one here wants that to happen or has suggested that they want that to happen.

That said we like to see Apple do well because we like Apple products and the chances of more Apple products coming along rather hinge on the success of the company at present. Furthermore, a healthy level of market penetration for iOS devices is vital for the health of the iOS Apps market which those who own iOS devices have a vested interest in.

So it's entirely rational to be pleased that a company who's products you like is finding success. Let's not pick fights.
Score: 3 Votes (Like | Disagree)

tony hatbasket
I wonder how this chart would look if there had been a new iPhone released early in H2. I guess we can see why apple is not in a huge rush to meet its usual 12 month release pattern.

As an iPhone 4 user on a 24 month contract it also doesn't bother me. If they leave it much longer I might even be able to resist the expensive mid contract upgrade and skip a generation. Though who knows how long it might be before v6
Score: 3 Votes (Like | Disagree)

Zunjine
And all without a bigger screen

I've seen a lot of comments about how Apple simply must put a bigger screen on the next iPhone. Yet here we see that the iPhone 4 and the 3GS with there supposedly inferior small screens are both selling better than any model with the supposedly superior massive screens.

I won't mind if the screen size remains the same. I won't mind if it increases. But to suggest that the market demands it is clearly counter factual. Look at the numbers!
Score: 2 Votes (Like | Disagree)