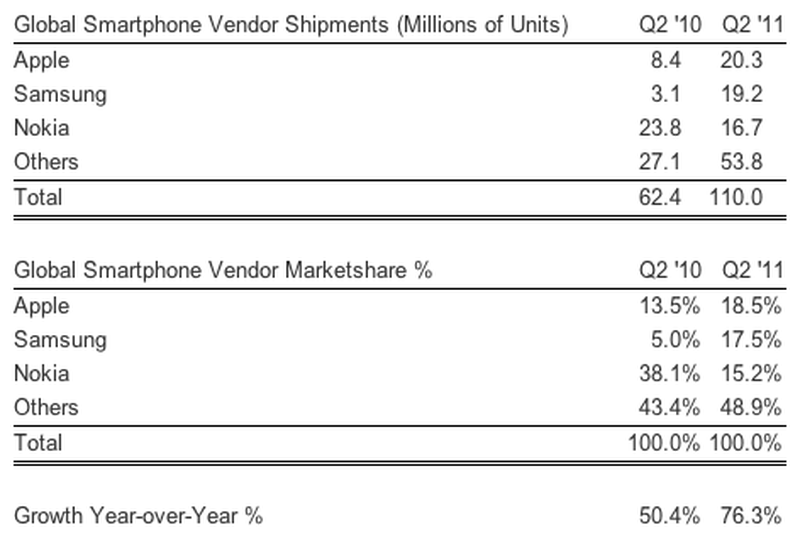 Alex Spektor, Senior Analyst at Strategy Analytics, said, “Global smartphone shipments grew a healthy 76 percent annually to reach a record 110 million units in Q2 2011. We had previously reported on Apple becoming the largest smartphone vendor in terms of revenue and profits. Now, just four years after the release of the original iPhone, Apple has become the world’s largest smartphone vendor by volume with 18 percent market share. Apple’s growth remained strong as it expanded distribution worldwide, particularly in China and Asia.”

With both Apple and Nokia reporting their quarterly financial results last week, it was confirmed that Apple had passed Nokia, but some analysts had suggested that Samsung might surge past both companies on the strength of its Android-based handset sales. While Samsung did indeed achieve remarkable 520% year-over-year smartphone growth to move from 5.0% of the market to 17.5%, Apple's performance was strong enough to at least temporarily take the crown with 18.5% of the market.

Update: ABI Research has just released similar data showing Apple on top of the smartphone market with Samsung in a close second.

ABI Research estimates that 47 million Android phones were sold during the quarter, giving the platform 46.4% of the smartphone market, more than double that of the iPhone.

Samsung is not even the top Android device seller in the U.S. market. I didn't expect them to be so strong in global sales (although I realize they are a huge and very successful company in many different markets).


Yeah, it usually comes as a shock to most US-Americans that there is a whole world outside the US borders - a world that does not feel, think or behave American at all...

The "rebirth" of Apple still is mostly a US phenomenon.
Rating: 12 Votes


then don't respond to obvious spam. :)

Truffy
I'm soooo happy that my favourite computer company is doing so well at selling the most annoying piece of hardware to plague the planet* :rolleyes:

wow all that cheap samsung phones are selling well :D


Not his again! How is being cheaper something bad? How is having many options in different price segments bad? Samsung have some very cheap phones of crap quality but they also have high quality phones that are both cheaper and better than the iPhone.
Rating: 8 Votes

dongmin
There's a reason why Apple is going after Samsung with all the IP lawsuits. Samsung is becoming the dominant Android vendor and smartphone vendor.
Rating: 8 Votes

Samsung has to divide their resources amongst several different mobile products? Why? Reality is that they choose to.

And that ignores the fact that Apple has to invest a lot more in software development that Samsung.


Lets compare apples and honey shall we? Were not discussing market share of Apple vs Samsung when it comes to software, LCD-screens or SSD:s. Were discussing smart-phone shares. Your numbers (at least the first one, i havent checked the second one) is totally irrelevant for this context.

p.s. as stated Apple then chooses not to. Still not a valid argument, and so far only Apple-heads have tried to make it.
Rating: 3 Votes

Seems like you're assuming Germany is the rest of the world...


Seems to be a two-way street as Apple infringes patents on their OS X platform.

This is an Apple-centric site.

The real story here *is* Apple. They're doing all this with one or at most two phones, using an OS that isn't licensed out to every vendor that can slam together a box.

These folks need to sell all kinds of handsets at all price points just to compete with Apple's at most two iPhone models. That's how impressive Apple's walled garden is. Not some OEM pushing someone else's OS.


I never get why this is seen as positive for Apple. Its an admission that they have a one huge R&D department, one software team, one hardware team, one marketing team, all of whom have the SOLE aim of getting an iPhone out (which, incidentally, is also a box). Compare this to Samsung who have to divide their resources amongst many different phone and yet still have bigger growth than Apple.

Oh and FYI, stop peddling the lie that Samsung lost any case against Apple and that they have been proven to use IP without consent. This is incorrect.
Rating: 3 Votes