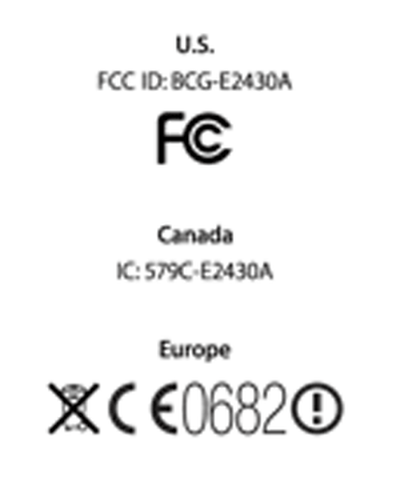 Zoomed in view of image
As the puzzle of Apple's next-generation iPhone codenamed "N94" begins to come together in the form of what has been dubbed the "iPhone 4S", the latest iOS 5 Beta 7 released earlier this week provides more confirmation that Apple is unsurprisingly moving towards a release.

One of the new files we've been tipped off about included in the latest update is called RegulatoryInfo-N94AP@2x~iphone.png, showing the regulatory data for the N94 iPhone as viewed through Settings > General > About > Regulatory on the device.

The device has yet to show up in the FCC's equipment authorization database, although those entries generally do not appear until the day the products are announced. Even then, Apple typically requests that some of the more sensitive documents such as photos of device internals be considered confidential and thus kept from public view for a period of time.

We've seen parts for the N94 and other references in Apple's SDK. That information has suggested the N94 is an A5-based iPhone that looks just like the iPhone 4. The assignment of an FCC ID suggests that Apple is close to bringing the new device to market.

troop231
Hope this means an event is coming soon!
Score: 6 Votes (Like | Disagree)

Lol, interesting, but, for exemple, N92 was the codename of the CDMA iPhone4, and not of a new iPhone2 :P Maybe N really stands for "New" and 9 for "i" but I think that the last digit is only a progressive number used to distinguish different devices.

When are people going to realize there will NOT be an iPhone 5, it will be the 4S. How may years in a row do we get ourselves pumped up for big things with apple and they only go so far. This will be another year for that. :mad:


When are people going to realize there will NOT be any proof of anything. How many years in a row do we get ourselves pumped up for big things with apple and they only go so far. This MIGHT be another year for that....

There is a reason it's called macRUMORS. Nobody knows, no use getting frustrated. That is unless you are an apple exec telling us that there won't be an iPhone 5.
Score: 3 Votes (Like | Disagree)

aeaglex07
I think the delay was icloud.
Score: 3 Votes (Like | Disagree)

I guess I'm bored lol but at least this puts to rest the opinions that the N94 is pure prototype not set for release.