Several MacRumors readers have forwarded us a "member only" email from Ideal-case.com claiming to show the antenna band for what would seem to be the "iPhone 4S" based on the current iPhone 4 design. While the antenna band was partially visible in a casing leak from last week, the new photos show direct comparisons between the new antenna band and both the GSM and CDMA iPhone 4 bands. 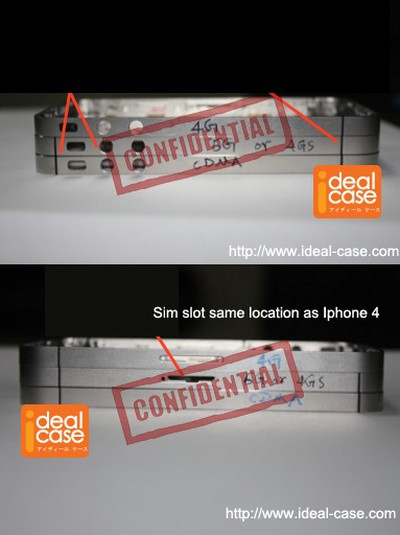 Interestingly, this is not the first time this particular design for the antenna band has surfaced, as a similar part appeared as long ago as early January, before the CDMA iPhone 4 had even been unveiled. That part was the first to show the shift in the antenna breaks that also necessitated a slight shift in the position of the mute switch on the CDMA iPhone 4, but also contained a SIM-card slot.

A number of parts appearing very similar to their iPhone 4 counterparts have surfaced in recent weeks, with the suggestion being that these could for a low-end "iPhone 4S" model being developed by Apple. The company has also been rumored to be developing a more significantly updated iPhone 5 offering a thinner design, although little has been seen of this design beyond third-party cases based on a claimed leaked design document.

The current iPhone 4 will handle iOS 5 pretty well, but I do think the voice recognition and new notification system will benefit and preform a lot better with the dual core A5 in the iPhone 4S.

The average customer wont notice any difference tho. Lets face it, the normal guy doesnt care for specs or what on earth "A5" is or what RAM does. All they see is a phone in the same shape of the 4 and ask themself why should i buy that "again" or how is that new, it looks the same. People (im one of those) like design changes more than anything else. Its getting boring having the same thing after a while ^^

U can say whatever u want about samsung but at least every phone looks different + they already got lte (now u can vote me down for saying the "S" word, i dont care)
Score: 9 Votes (Like | Disagree)

d4rkc4sm
rumors about antennas make me so happy
Score: 9 Votes (Like | Disagree)

wah!!!you complain to much!!!your a crybaby!!! stop complainining!!! you're complaining annoys me!!! i luv apple products and i dont wanna be annoyed with criticism of my company and complaining is for loosers!!!

I'm always entertained by the 'apple is right and no one better complain about them cause i need someone to yell at!' posts. Quit complaining and go comment on something else already.

Your grammar and spelling skills are making my cat cry :eek:
Score: 7 Votes (Like | Disagree)

I think storage options will stay the same 16GB and 32GB

No redesign no bigger screen. I can already see the headlines of tmrws newspaper "Is Apple Already Sinking Under Its New Leader?"

Boring. Who cares for more ram, the iphone 4 will handle the new ios just fine considering the 3gs is even getting it + unless devs invest in extra apps for the "special" new a5 and ram iphone (which they wont bc the market of other iphones gives them way to much money still) no one will notice any difference
Score: 5 Votes (Like | Disagree)
Read All Comments