Fusible now reports that another domain, PVRApple.com, has made a similar transition, with its WHOIS registration information being changed to point to Apple instead of DNStination. 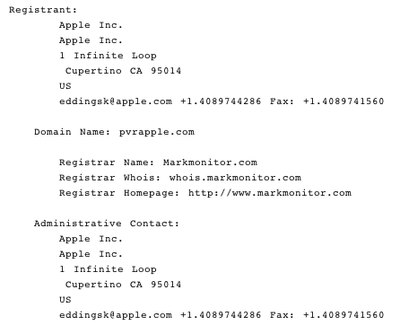 Speculation surrounding the domain naturally turns toward personal video recorder functionalities. Apple has been rumored for many years to be working on a set-top box offering PVR functionality, and some thought that the Apple TV might eventually move in that direction. But with the second-generation Apple TV released late last year, Apple did away with nearly all internal storage and turned the Apple TV into a device dedicated to streaming content.

Apple has also been rumored to be looking to enter the television set business, perhaps integrating some of the Apple TV's functionality directly into television sets. Apple seems to be focused, however, on streaming solutions that bypass the traditional cable provider setup, making it somewhat unlikely that Apple would still be interested in pushing forward on PVR technology for television.

It seems odd for both applepico.com and pvrapple.com to have made the transition to being publicly linked to Apple, and it is unknown whether the change is simply due to some administrative shuffling or if there is more to the story. Apple maintains control over hundreds of domain names, many of them not obviously related to Apple products or features, and thus it is difficult to read too much into the company's specific holdings. But changes related to individual domains owned by Apple naturally pique the curiosity of those trying to look into Apple's plans for the future.

Apple has been working on one for some time, at least according to PatentlyApple. I remember seeing Apple patents for a DVR/PVR interface and operations more than a year ago. I'm sure there is something in the hopper to be rolled out at some point in the future.

I agree with one of the previous posters - it would be nice to see something like an iTunes server for all our media. Connecting television recording to such a server device (think Time Capsule) would be fantastic.


Below are two such links that reference DVR/PVR in association with AppleTV. There are many, many more changes seemingly coming for this device one day.

Dunno about the "P", but the VR could be Voice Recognition which, according to recent rumours on here is more likely than a personal video recorder.

iGobbleoff
They need to make an iTunes server
Score: 1 Votes (Like | Disagree)

Who calls them PVRs? They're DVRs. Is that a weird Canadian thing or something?


I know I'm crazy -- people tell me so every day. But, let me share with you all the throughts of this crazy person.

PVRs are not, in fact, DVRs. They are PERSONAL video recorders. This is an idea I've read/heard multiple times. Think of the camera mounted in a police car. Then translate that to your person. It's a camera that records "your life." Both audio and video. That's a PVR. (A DVR, of course, sits near your TV and does TiVo-like things.)

Guess what. If somebody created a PVR as described above, it would probably be "pico" in size.


Just to be clear: I've had this kind of crazy idea before. And then sometimes I get myself convinced that I'm "right" and they're really making whatever I dreamt up. This is not one of those times. I do NOT think that Apple is making a PVR and calling it the Apple Pico. But, if they do, you heard it here first!
Score: 1 Votes (Like | Disagree)

Nicolas4ever
i think they prepare something good :D
Score: 1 Votes (Like | Disagree)

C00rDiNaT0r
imagine someone finds out Apple acquires a domain like iToilet.com... will people start speculating what Apple plans to do to revolutionize the user experience?
Score: 0 Votes (Like | Disagree)
Read All Comments