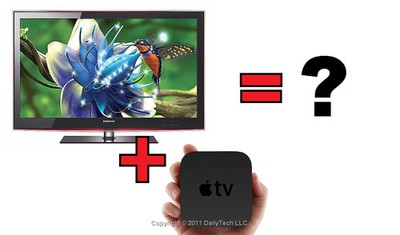 DailyTech revives a long running rumor that Apple may be getting into the TV set business. (via 9to5mac) These rumors have been running for years with previous claims even specifying that Apple would release 42" and 50" Plasmas displays for sale in Apple Stores. Both Apple's Steve Jobs and Tim Cook have dismissed the possibility of an Apple TV set before. In 2010, Cook responded to questions about the Apple TV set top box at a Goldman Sachs Conference:

Q: Where do you see things going with the Apple TV?
A: It's still a hobby, but our gut tells us there's something there. The go-to-market model is difficult, and we have no interest in being in the TV market. But we have continued to invest in the Apple TV and will keep doing so.

According to DailyTech, a "former Apple executive" has revealed that the company has entered into a partnership with an unnamed consumer electronics manufacturer to build Apple-branded television sets that will come with Apple TV and iTunes functionalities built directly into the television set.

While the televisions would be manufactured by the partner company, they would be branded and marketed as Apple products. Apple is understood to be shooting for a fall release, although the debut may slip into early next year.

Apple's own Apple TV set top box has seen limited success since its launch with Apple describing the entire business as a "hobby". Selling an all-in-one solution could address one of the hurdles that Steve Jobs discussed when talking about Google's entry into the same market:

"Subsidized set-top boxes have squashed innovation because no one wants to pay for separate boxes...ask TiVo, Roku, us, Google in a few months. The set-top box needs to be torn up and redesigned to get people things they way they want them.

DailyTech hasn't been a recent source of Apple-related rumors, so it's hard to gauge their accuracy on the topic.

important
So let me get this straight - Apple can "barely" (by iOS device standards) sell the $99 Apple TV, but they are going to roll out actual TVs?

Arcus
Blow Netflix away? Lets see, all I can eat streaming and as many DVDs as I can watch , mail and watch for $9.00 a month. Ya, good luck with beating that.
Score: 13 Votes (Like | Disagree)

appleguy123
I wouldn't want to buy a 2,000$ tv every time some new software feature I want comes out. That's the main reason I like the set top box idea.
Score: 13 Votes (Like | Disagree)

Samsung has their own app store built into their televisions, complete with Netflix app, etc.

For them to completely abandon that in favor of an Apple pairing... well, it just seems unlikely.

Apple selling televisions doesn't exactly sound likely either. And the only way Apple is going to put a dent in Netflix's progress over the last couple years is to offer all-you-can-eat subscriptions through iTunes. That won't happen. A lot of this stuff blowing in the wind is likely bunk.
Score: 12 Votes (Like | Disagree)

Jokes aside, I think Apple has the capability of producing some very nice TV sets (quality wise) as well as implementing a lot of features like built in WiFi ... hell, just throwing an Apple TV into that in general.
Score: 12 Votes (Like | Disagree)