iPhone 5 Cases Are 'Everywhere' in China 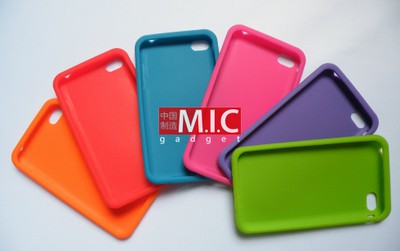 MICGadget reports that the early iPhone 5 cases are "now everywhere" in China. The site has posted another gallery of these case designs, which show a mute switch on the opposite side of the device.

The design is also said to be slightly larger than the existing iPhone 4 and has a slight tapering from top to bottom in thickness. This particular design was originally reported by ThisIsMyNext back in April. At the time, we had expressed doubts about it due to our own tipster about the validity of the design. But now, with the influx of these case designs, we have to reconsider.

It's clear that some Chinese case manufacturers are confident enough in these designs that they are starting to mass produce these cases. As we've said before, there is a massive financial incentive for companies to have case designs for new Apple products ready on launch day. In fact, three people were sentenced to prison in China for leaking details of the iPad 2 case design prior to its launch.

As frequent as these case leaks are, it's notable that they have been remarkably accurate in the past. The iPad 2 cases, of course, were quite accurate. iPhone 3G cases were real, as were 6th Generation iPod Nanos, and 5th Generation iPod Nanos. Not all case leaks turn into actual products, however. The iPhone Nano never came to be, and the iPod Touch with Camera cases were legitimate but the product was canceled/delayed.

Apple is expected to launch the iPhone 5 in September of this year.

Eddyisgreat
This'll go great with my new Appel iPohne 5 that I got in Apple's Kunming (http://birdabroad.wordpress.com/2011/07/20/are-you-listening-steve-jobs/) Store.
Score: 30 Votes (Like | Disagree)


business? what business do you do which requires a mobile phone? unless you have a low-grade job which requires on-call immediate start working conditions to keep a paycheck, you don't.


Wow. Good to see you have your finger on the pulse of the contemporary business world. You're right. Nobody needs these new-fangled "tella-fonz" if they have a good job. Only janitors and fire fighters need phones.
Score: 24 Votes (Like | Disagree)

lol. yeah man... people the 90s/80s and before were all lonely losers who didn't have any friends.

business? what business do you do which requires a mobile phone? unless you have a low-grade job which requires on-call immediate start working conditions to keep a paycheck, you don't.

As a marketer for UMG, and on contract for Polydor, and AVEX. NO executive will text message you anything, and anywhere you go, one of the first things which are said is "put your phone on silent or get out".

It seems to me, all these "social things" for "friends" don't actually go anywhere and sit on FB and text message each other what they ate for lunch


The jealousy is strong with this one...
Score: 22 Votes (Like | Disagree)

really? janitors and fire fighters? both are generally set-hours and you seriously think a fire-fighter uses a mobile phone to be alerted about fires to attack or the other things they do?

edit: the only industry in the world which has an upperhand on the mobile phone world, of taking something consumers didn't need and turning into a false necessity is the bottled water market. even the cosmetics and beauty markets are below the mobile phones and water markets. although they deserve it, because they gain by hurting people

At first I thought you were out of touch with reality, but now I see that you are trying to evoke an emotional response from people and do not actually believe the things you are posting.
Score: 16 Votes (Like | Disagree)


then again. doesnt effect me. i think mobile phones are junk, and the majority of people dont actually need one. but they have developed some sort of disease where they think they cant function without one.


And then there's the rest of us, with friends, business to conduct, etc.
Score: 15 Votes (Like | Disagree)