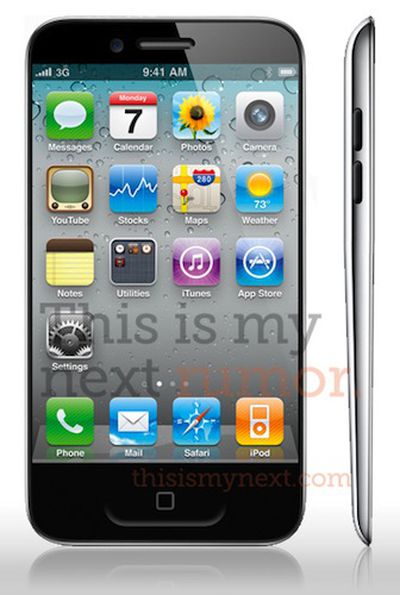 Former Engadget editor Joshua Topolsky has revealed possible new information on the upcoming iPhone 5, but that information seems to contradict other recent claims. Topolsky reiterates from his previous Engadget report that the next iPhone is to be completely redesigned, and that it looks more like the iPod touch than the iPhone 4. The new phone will be thinner and have a "teardrop" shape which goes from thick to thin, similar to the MacBook Air.

Meanwhile, the home button will be doing "double duty" as both a button and and a gesture area.

this falls in line with testing weve seen for gestures on the iPad, and our sources say that gestures are definitely coming in a future version of iOS. The home button will likely be enlarged, but not scrapped altogether.

He also details that the screen will occupy nearly the entire front of the phone leaving almost no bezel. This information is consistent with some earlier rumors that suggested an "edge to edge" screen. In addition Apple is said to be doing very "interesting things" with bonded glass technology and even exploring designs where the earpiece and sensors are behind the screen itself.

Topolsky is also hearing that the screen may go up to 3.7 inches while keeping the same resolution. This would keep the DPI within the "Retina" display moniker at 312dpi. Finally, there are some hints that there may be some form of inductive or touch charging but this seems unconfirmed.

Joshua Topolsky is the former editor-in-chief of Engadget and is well connected with his previous rumors being published to Engadget. This information, however, contradicts some previous reports from Reuters which suggest the iPhone 5 will carry a very similar form factor as the iPhone 4. Notably, in the same original Engadget report that detailed the "completely redesigned" iPhone 5, Topolsky/Engadget had previously predicted that the iPad 2 would carry a higher resolution screen and SD card slot, neither of which came true.

Update: We've received a tip (that we believe is reliable) that this redesigned iPhone 5 report is untrue.

redchannel
That is one ugly mock-up :eek:
Score: 25 Votes (Like | Disagree)

Chriseybear
I hope it's not drastically thinner and lighter. The 4 at the minute is just right, nice to hold feels right.

Maybe It's just my man handling sausage fingers but I wouldn't like to see it similar to the iPod touch.
Score: 12 Votes (Like | Disagree)

adztaylor
I can't see them making the iPhone look like the iPod Touch.
Score: 10 Votes (Like | Disagree)

The iPhone 4 had just the right thickness. Tapering everything to a weak point is bad engineering.
Score: 9 Votes (Like | Disagree)

kolax
I'm guessing Josh is just after some hits.

iPhone 5 will just be the iPhone 4 with a better antenna design and faster internals. iPhone 6 will probably have a re-design.
Score: 7 Votes (Like | Disagree)
Read All Comments