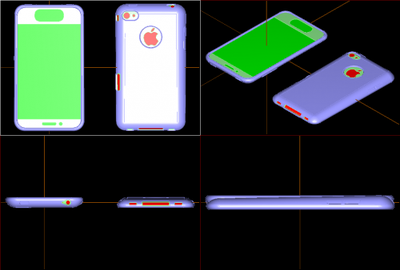 MobileFun.co.uk publishes two case designs that are claimed to be for the upcoming iPhone 5. The new designs seem to show that the iPhone 5 will carry a number of changes including a larger screen, curved/sloped back, and larger home button area.

These design aspects were previously reported in April by ThisIsMyNext. Their report at the time claimed many of the same features:

the home button is doing double duty as a gesture area; this falls in line with testing we’ve seen for gestures on the iPad, and our sources say that gestures are definitely coming in a future version of iOS. The home button will likely be enlarged, but not scrapped altogether. Furthermore, we’re hearing that the screen on the device will occupy the entire (or near to it) front of the phone, meaning almost no bezel. Our source says the company is doing very “interesting things” with bonded glass technology, and has been exploring designs where the earpiece and sensors are somehow behind the screen itself, making for a device where the display is actually edge-to-edge.

The images do seem to be circulating from Chinese case manufacturers. The above image was posted by a Norwegian accessory manufacturer just the other day. This is the same image that MobileFun.co.uk also received and posted.

We suspect all of the images and information are coming from a common source, but we don't necessarily believe it to be true. At the time of ThisIsMyNext's posting, we received a reliable tip that this is not what the iPhone 5 will look like. As well, several other credible news outlets have said that the iPhone 5 will "look largely similar to the current iPhone 4".

adztaylor
Moral of the story is, no one knows until Steve stands up on stage and has it in his hand. Either that or it gets lost in a bar again.
Score: 51 Votes (Like | Disagree)

oghowie
I hope not because the mockups are damn ugly.
Score: 28 Votes (Like | Disagree)

I actually like the design...On another note, after more than 4 years of visiting this site almost every day, I just realized that the MacRumors logo has a question mark in it...wow.
Score: 10 Votes (Like | Disagree)

mms13
I hope they don't return to a curved back. I love the symmetry of the iPhone 4 and how it lays flat. I do think an aluminum casing like MacBooks have would be really cool. A bigger screen is definitely welcome.

At the end of the day though I think the iPhone 4 has a beautiful design and if they didn't change it, I wouldn't be that surprised.
Score: 8 Votes (Like | Disagree)

cmChimera
There is 0 consensus about the new phone. Despite hearing a million rumors on it, I have no idea what new features it will have nor what it will look like.
Score: 6 Votes (Like | Disagree)
Read All Comments

Friday July 10, 2020 11:12 am PDT by Juli Clover
Apple this month published a support document that warns customers against closing their Mac notebooks with a cover over the camera as it can lead to display damage. Image via Reddit Apple says that the clearance between the display and the keyboard is designed to very tight tolerances, which can be problematic. Covering the camera can also cause issues with automatic brightness and True Tone....
Read Full Article • 330 comments

Saturday July 11, 2020 1:42 pm PDT by Arnold Kim
Casual MacRumors visitors may not realize that we have a very active PowerPC forum where users discuss issues related to PowerPC Macs that have not been produced since 2006. Threads range from hardware upgrades and software options to nostalgia: Photo by AphoticD Apple's recently announced transition to Apple Silicon (Arm) based Macs raised some interesting questions about future support...
Read Full Article • 102 comments

Tuesday July 7, 2020 6:49 pm PDT by MacRumors Staff
Apple is planning on launching the iPhone 12 this fall which is rumored to be coming in 3 different sizes: 5.4", 6.1" and 6.7". The middle size (6.1") matches up with the currently shipping iPhone 11, but the other two sizes will be entirely new. Over the weekend, there was some excitement about how well the new 5.4" iPhone 12 compares to the original iPhone SE. Those who have been hoping...
Read Full Article • 151 comments

Friday July 10, 2020 3:33 am PDT by Tim Hardwick
Apple TV+ today debuted "Greyhound," the highly anticipated Second World War movie starring Tom Hanks as a naval officer given command of Navy destroyer Greyhound in the Battle of the Atlantic. "Greyhound" features Hanks as George Krause, who must fight his own self doubts and personal demons as he leads a convoy of Allied ships against German U-boats to prove that he belongs in command. ...
Read Full Article • 68 comments