Monday July 25, 2011 8:26 am PDT by Eric Slivka
The Wall Street Journal reports that it will be removing subscription links from its iPad application, deciding to satisfy Apple's new in-app purchasing and subscription rules by removing the purchase links rather than offering subscriptions through the app with Apple taking a 30% cut.

People who download the app and want to subscribe will have to either call customer service or visit WSJ.com.

"We remain concerned that Apple's own subscription [rules] would create a poor experience for our readers, who would not be able to directly manage their WSJ account or to easily access our content across multiple platforms," a Journal spokeswoman said.

The report also notes that Kobo, the eBook company that has risen to prominence through its affiliation with the now-bankrupt Borders, has pulled direct book sales from within its iOS application.

Mike Serbinis, Kobo's chief executive, said Apple told Kobo Saturday that it could no longer operate its digital bookstore from its Kobo apps and had to stop selling e-books directly through them. Kobo subsequently altered the apps so that they no longer sell digital titles.

Now Kobo customers who want to buy digital books via their Apple devices will have to visit www.kobo.com via Apple's Safari browser to make their purchases, a potentially more laborious process for customers used to buying e-books directly through a Kobo app. Customers will continue to be able to access and read Kobo-purchased books from their library on various Apple devices.

Google's Google Books app for iOS has also disappeared from the App Store, although Google has declined to comment on the reason for the app's removal. 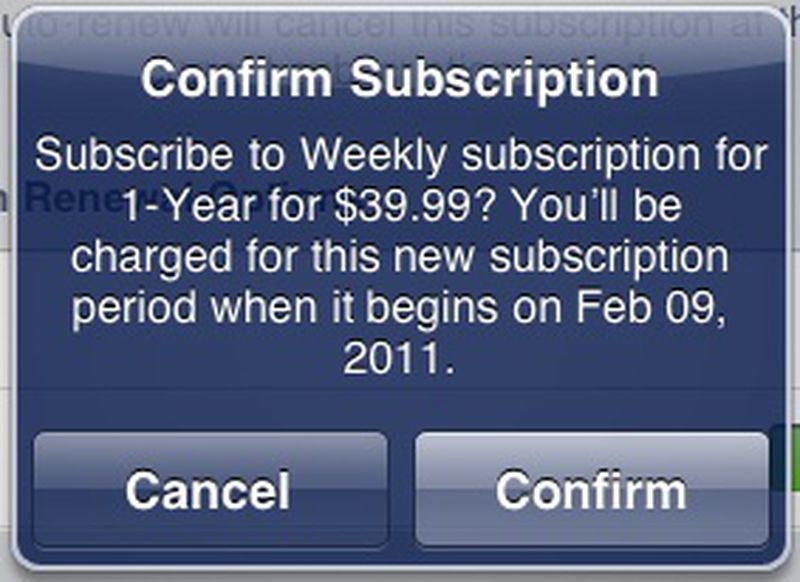 Apple had set a deadline of June 30th for apps to comply with the new rules, but has reportedly been lenient about enforcement as it continues to work with high-profile developers on making their apps compliant. But with the Wall Street Journal, Kobo, and potentially Google's eBooks service all pulling direct content sales from within their apps, it certainly appears that not all of the holdouts are working toward addressing the issue by supporting in-app subscriptions and purchases.

Update: Google Books has returned to the App Store with the link to the company's bookstore removed, although the app's description mentions only "minor enhancements and bug fixes" among the changes included in the update.

WiiDSmoker
It's a completely dickish move and anyone who approves of Apple of doing this is completely blind and biased.
Rating: 13 Votes

reden
What an unnecessary inconvenience Apple. Pure greed. You are forcing startups who rely on a free app and in-app purchases to go the web-app way.
Rating: 8 Votes

WannaGoMac
No surprise, a struggling industry can't afford to give up 30% of it's revenue to apple just for the pleasure of being an iOS app.
Rating: 8 Votes

reden
I actually hope Apple comes out last in the mobile arena at the end of the day, just like what happened with Mac OS. They think they can run the world, and have everyone feed off the palm of their hand, and smack them if they try to take too much. Tell me really, how is taking 30% revenue from in-app transactions justifying the costs involved for that one purchase a user is making through an app? Unbelievably greedy.
Rating: 5 Votes

binarymelon
Hopefully Apple will adjust it's 30% cut because of this. I have always thought this was a little steep.
Rating: 4 Votes

Why would you buy a Kindle rather than just go to Amazon's site in a browser, buy your book, and have it sent to your iPad?


I buy my Kindle books on Amazon's web site and have them delivered to my iPad. Apple won't be getting any in-app purchases from me for newspapers and books until they stop this insane policy of shaving off 30% from already-thin margins.
Rating: 3 Votes


Don't you think it's more likely that the information will be used to determine the direction of the bookstore? For instance, as a seller I would like to know which kinds of books sell best. Or how much a customer is willing to pay for a book. There are all kinds of metrics that a retailer needs to steer on when running a store. This is important data for the store itself, I'm sure it isn't going to sell this valuable information to a competitor.
Rating: 3 Votes

This whole thing is bad for customers. Because of that, I don't see this being good for Apple. I'm already displeased with Apple because of this.

Subscriptions are not the same as other items. Subscription pretty much always means a reduced rate for a long term agreement, paid in advance.

Therefore, the 30% cut that might be reasonable at per issue pricing, is not reasonable for a subscription. Apple needs to get something for providing the store, but 30% when it comes to subscriptions is too high - they should look at something closer to 15%.
Rating: 3 Votes