Since Lion's release, we've been collecting tips on reverting changes found in Lion back to behavior found in Snow Leopard. Now some might argue its better to get used to the stock installation, but if that's not you, here are the tips we've seen. 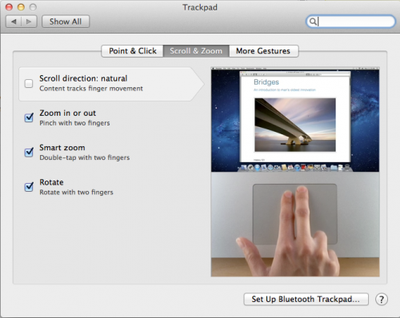 • Natural Scroll: This change seems to have generated the most outcry. In Lion, Apple has reversed the normal scrolling direction for trackpads and scroll wheels. In the past, the metaphor has been that swiping down has caused the page to scroll up. Now, swiping down means scrolling down. It takes a few days to get used to, but if you can't there's an option to revert back.

• Spaces: Assigning apps to one space or all spaces.

• Classic Mail: Lion's Mail takes on a distinct iOS look, but the classic Mac OS X Mail look is available through a checkbox preference in Mail.

• Front Row: Mad Hatter has instructions on how to re-enable FrontRow on Lion, though we've heard some mixed results about it working. - Use at your own risk, we've heard it has caused problems.

• LimeiBook86 posts some instructions which duplicate ones we have shown here, but also includes restoring Finder Window's Path and Status Bar as well as turning off Dashboard as a space.

Anyone figure out how to make the mouse wake the computer from sleep? This is a major annoyance for me.


Just requires a click instead of mouse movement for me, IMO this is much better as it greatly reduces the chance of accidentally waking your Mac up.
Score: 23 Votes (Like | Disagree)

The most stupidest things that i ever hear is articles "how make new thing work like old". Apple always was company with advanced technology. If Apple change something they always know why and because.


The most stupidest things that i ever hear is people who blindly accept everything Apple does as the best way.

Just because Apple "know why and because" they've made a change, doesn't make it right. And certainly not right for everyone.

Check your EULA. There is no condition of owning Apple products that you must agree with and like everything Apple does.
Score: 19 Votes (Like | Disagree)

"Turn off Lion's stupid ban on key repeating"?? I you kidding me?? :eek: This is the one of the small and useful function, than F.. Windows will never had.


It's a reasonable thing that people would want to turn again.

"Disable resume in Lion"! :eek: Sure! Thank Steve, that you add disable function for your new great OS, now all people around the world can turn it off!! Btw who can tell me how to disable stupidest touchscreen on my iPad?


Resume might be useful to some, but I don't want my last used things to reappear when I re-open that app. Might have personal stuff there, or open a document that you don't want to work on, so you end up having to close it anyway.

So, dear Mac users, if you are true :apple: user remember - all new functions is always look strange (because they new), but after some time, you will accustomed and THIS new functions became a great canyon between your Mac and others pfsht.


I'm not a 'true' Apple user by your definition, but I'm a power user. And small changes like ones described here can really interrupt my workflow. Whether I have to "re-learn" isn't always the case, I've got my workflow adapted to how previous OS X versions worked. Lion has changed a lot of that, some for the better, some of the worse.
Score: 17 Votes (Like | Disagree)

Answers like this don't require any critical thinking or intellectual honesty. It's the kind of stuff people skip over in google's search results.
Score: 14 Votes (Like | Disagree)

Some people really don't like change, now do they?

If you have slow Mac don't install Lion! Or upgrade the Mac

Maybe you didn't get the memo, but there are seriously cool security enhancements in Lion as well as that whole iCloud thing coming in iOS 5 in September, not to mention document revisions and a very cool new implementation of FileVault. Just to name a few.

I'll never understand people who insist on dictating how others should use their computers... :rolleyes:
Score: 12 Votes (Like | Disagree)
Read All Comments