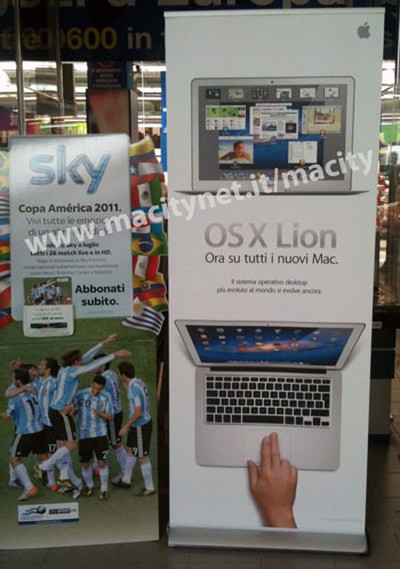 The new signage advertises OS X Lion as being "now on all new Macs" and encourages users to "take a tour" of the new operating system. The machines on display have not, however, been updated to Lion yet.

Meanwhile, other signage promoting the sale of standard App Store gift cards to cover the purchase of OS X Lion has also popped up in at least one store of Dutch retail chain Dixons. Gift cards not only allow customers to effectively purchase OS X Lion for others, but also provide those without a credit card with a means to purchase content from the Mac App Store and Apple's other digital stores.

Numerous sources have indicated that Apple's retail stores are planning "overnights" tonight in which staff will change out promotional materials and update other aspects of the store layouts. Tonight's activities are presumably related in large part to OS X Lion, as the stores have reportedly received hard drives containing the new operating system. Other reports have claimed that Apple will indeed be releasing OS X Lion and new MacBook Air models tomorrow.

Update: The Macitynet.it report has been pulled by request. We have also received word that the Euronics location has removed its prematurely-posted Lion signage.

Mr. Chewbacca
Looks like the cats out of the bag!!

Yes, it's fun to have a new OS, but we're not curing cancer here.

Enjoy Lion. I'm looking forward to it, too.

But maybe we need to dial down the intensity. I doubt if it will change your lives THAT much.

And don't forget to yell at the kids to get off your lawn.
Score: 11 Votes (Like | Disagree)

Chupa, you don't think they would put an outdated MBA photo in a Lion release banner, do you?

The hype around Lion is drowning out the fact that we don't have enough solid info on the MBA and that portion of the picture is actually the bigger news story.

I think we've got a very serious problem with expectations around the MBA and it's going to be almost crushing if it's released with lower than 4GB of RAM as that will indicate that the pricing isn't "real." You'll need 4GB of RAM to run Lion and the cost of additional RAM will push the costs of the new MBA up closer to where Sony's new "MBA killer" is landing price-wise.

The MBA will still get purchased in high numbers but the lack of TB, no backlit keyboard, and insufficient RAM are going to put a major dent in sales.

I also fully expect Lion will release at least a week before the MBA which is going to be problematic for quite a few people especially since it's rumored that the MBA will be Apple store only.

That means that the crowds to get Lion will have to return if they also want the MBA on the 27th. The forced march to the Apple stores twice in one week will grate on people.

The reason Apple pulled MBA sales from Best Buy and other resellers is they want to keep all the margin for themselves - which is fine but the Apple stores aren't nearly sufficient enough for everyone.

I see danger and peril written all over this.


Dude shut up.
You have no idea what you're talking about and you're trying to freak everybody out.

Show me a picture where you can clearly see there is no backlight...or thunderbolt...etc.

Why would Best Buy have no Airs for a week?

Lion and MBA's are coming out tomorrow whether you like it or not.
Stop trolling.
Score: 9 Votes (Like | Disagree)

Simple, automatic, get out your cash or credit card, Steve's got his hand out.

Time to upgrade and pay up.


I see you all the time on MacRumours, and you're such an idiot.
Score: 9 Votes (Like | Disagree)

$29 for a whole new OS vs upgrade:
http://www.microsoft.com/student/en/us/windows/buynow/default.aspx


Mac Fanboys need to get educated.


That's $29 IF you're a student AND IF you have Windows Vista.

Flaxxx
Oh, and for those who are afraid Lion won't be compatible with the stuff you do, here is some info:

I tested tons of pornography on Lion and it all worked fine.

So you can all upgrade with no problems. Your stuff will work.
Score: 7 Votes (Like | Disagree)
Read All Comments