Monday July 18, 2011 9:13 am PDT by Eric Slivka
AppleInsider reports that this Wednesday may finally be the day that OS X Lion and new MacBook Air models finally begin shipping as consumers have been anxiously awaiting the releases.

According to people with proven track records who would be in a position to know, the new product launches are set to occur later this week. Specifically, one person said the products would be released on Wednesday at 8:30 a.m. Eastern.

Circulating rumors have claimed that the updated MacBook Air models will sport a minimum of 128 GB solid state drives and 4 GB of RAM, and will also see the return of a backlit keyboard. 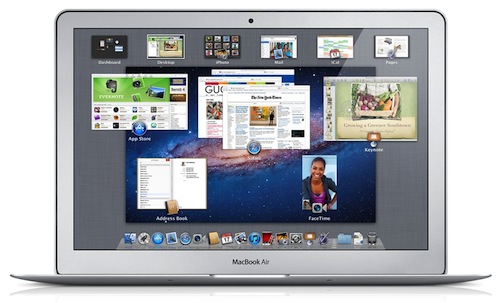 Apple has been reported to be holding new hardware launches until OS X Lion is ready so that it can ship the machines with the latest operating system pre-installed. A number of other new hardware updates are said to be pending, including a Mac mini refresh and an updated LED Cinema Display. New Mac Pro models have also been rumored for release later this month or early next month. All of the new releases are said to support the new Thunderbolt high-speed data connectivity standard.

Tonewheel
If I had a nickel for every time.....

Change the name from MacRumors to MacGuessing.
Rating: 56 Votes

BounouGod
So... 43rd time's the charm? At some point this has to come out right? Right?
Rating: 37 Votes

astrofaes
I'm sure Apple Insider will eventually get it right :rolleyes:
Rating: 27 Votes

164 more possibilities to be right this year.
Rating: 22 Votes

zedsdead
Like I've been saying for weeks, after the financial conference call. They do not release products before hand.

Samsumac
"people with proven track records who would be in a position to know"....

Are these the same people making the predictions last week or the week before that... :p
Rating: 18 Votes

164 more possibilities to be right this year.


They said they would release in July. 13 more possibilities.
Rating: 17 Votes

Now, can they throw in a new iWork with that Lion release? Please?
Rating: 17 Votes

Gamoe
LOL! Every week a new rumored date. Gotta get it right eventually!

And I think this might actually be the right date!

profets
Now they're even bold enough to choose such a specific time for release?
Rating: 15 Votes