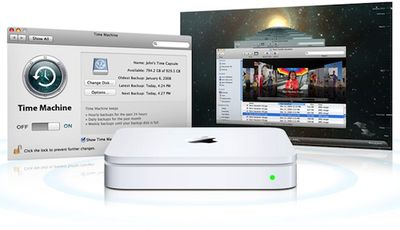 Apple is about to launch upgraded AirPort Extremes and Time Capsules, according to 9to5mac who cites Mr. X as a source. The new part numbers are listed below and offer a higher storage capacity Time Capsule at 3TB.

The prices of all parts are said to drop in price, though the exact price hasn't been specified. Given the last minute part numbers, we expect the new devices could launch as early as Tuesday morning.

What's particularly interesting is that the 3TB part was predicted by MICGadget in their report late yesterday.

What’s more, the 1TB model may go extinct, and the new Time Capsule will be available in 2TB plus storage, and according to our trusted source, 3TB is tested, but not sure if Apple got it to work.

podiki
Pity, I use my Airport Extreme to heat my house in winter. No upgrade for me.
Score: 21 Votes (Like | Disagree)

Ahheck01
Assuming the prices are much more reasonably than current offerings ($99 seems very Apple), I will almost definitely buy the new Airport Extreme, if not a Time Capsule.

Although I hope this isn't the only announcement for today. Final Cut Pro X can't come soon enough. Anyone else?

podiki
BTW, a NAS? With one drive? I never did get why the time capsule has just one drive.
Score: 3 Votes (Like | Disagree)

wordoflife
+1 for the cheaper Airport Extreme.
I'm not paying $170 for a router that only has 3 ports. I think I'd rather get something cheaper, with 4 ports, and spend an additional 10 minutes setting it up.
Score: 3 Votes (Like | Disagree)

MythicFrost
This may sound like a weird question but: What day is "today"?

The article said they may launch as early as tuesday, but what day is it now from macrumors time? I live in Australia and it's tuesday night here.
Score: 2 Votes (Like | Disagree)

ratzzo
Ooh, about time for a capacity upgrade! I might also get an AirPort Extreme if they do drop prices (4 storey house :(). I don't expect them to drop significantly though
Score: 2 Votes (Like | Disagree)
Read All Comments