Over the weekend, we heard rumors that Apple will be delivering new Mac minis and Mac Pros in the late July/early August timeframe. Now, MICGadget claims to have new information about these upcoming desktop refreshes and Time Capsule/Airport devices. Much of the information we've seen before, but they do offer some interesting additional notes of interest. 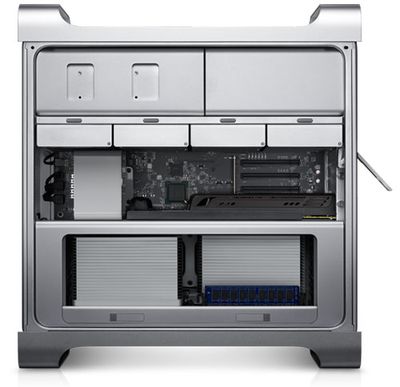 Current Mac Pro design
As for the Mac Pro, MICGadget is also claiming that the new MacPro will be come in a "rack-mountable" design in their new server version to help replace the Xserve. We've heard this before as well, but they are also claiming that Apple will be using a "unique CPU" developed for the Mac and not seen in the PC.

Sandy Bridge and Thunderbolt are coming to the new Mac Pro, and at the same time, an unique CPU will be developed for Mac. This unique CPU is not seen in PC.

Early MacRumors commenters in the Mac Pro/Mac mini rumor discussion pointed out that Mac Pro-suitable Sandy Bridge processors aren't known to be available in time for the late July/early August timeframe. The use of a custom CPU would explain away this discrepancy. Apple and Intel have a close relationship and are Intel has been known to supply Apple with custom CPU parts in the past. The original MacBook Air also used a custom part that was available only to Apple for a period of time.

As for the Time Capsule and AirPort Extreme, MICGadget claims that the devices are newly designed with better heat dissipation than previous models. They claim that the new TimeCapsule has a lower TDP and low power consumption hard drive using Apple firmware, while the AirPort Extreme has improved signal strength with six antennas built in. Finally, they echo previous claims that the Time Capsule will serve as a caching system for software updates in Lion and iOS 5.

MICGadget has not previously published many original rumors, so their reliability is unknown. The custom Mac Pro CPU, however, rumor fits in nicely with the previous Mac Pro and Mac Mini release timeframe.

Prallethrin
Perhaps "timed-exclusive" would be a better term than "custom".

To design and fab a custom part, especially in small quantities is hideously expensive. This is probably just Intel giving Apple first dips on upcoming tech, eg. Thunderbolt - you know for publicity; it also helps that Apple doesn't ship crazy amounts when it comes to desktop/laptop products so Intel's "just starting up" manufacturing process can keep pace.
Score: 8 Votes (Like | Disagree)

Are there current benchmarks that compare the C2D with nVidia graphics vs. the combine Intel SB?

I know little about graphics so I hope someone can explain the comparisons between the two. Wouldn't taking a step back in graphics for the sake of integration be stupid?

Simple question, if the mini has the new Sandy Bridge processor (graphics combined) will there be less graphical power then the intel's with the nVidia chip?

Hope for an honest and straightforward answer, I would really like to be informed not harassed.


NVIDIA doesn't make integrated graphics chipsets for i3/i5/i7 chips, so if Apple wants to upgrade the processor they have to switch back to integrated Intel graphics. They'd obviously want to keep NVIDIA integrated graphics, but it's just not possible. Apple basically held out as long as they could. There are discrete graphics options of course, but those cost more and need more space.

Ferazel
The custom Mac Pro processor is probably just a custom Sandy Bridge desktop chip that allows for multi-socketed motherboards. I seriously doubt it is as extreme as an entirely new architecture (like ARM).

Or it may just be that Apple is going to release a desktop chip in their single-CPU towers and save quite a bit of cost and upgrade the multi-processors later. The advantage that a Xeon vs. Desktop variant is relatively minor. As I said elsewhere, a bigger speed boost to the system overall would be to include a quality SSD instead of paying to get a very minor speed increase from the CPUs.
Score: 7 Votes (Like | Disagree)

They ability to deny the hackintosh community. With a custom CPU, assuming Intel will seel the CPU only to Apple, it'll be increasingly difficult to load a hackintosh kernel etc.

Not really. Because 1) Apple will continue to use regularly production-run Intel processors in the MBPs, the MB, the MBA, the iMac, etc., 2) Apple has to maintain "legacy" support for older Intel processors and chipsets they used to allow people to upgrade, thus allowing the Hackintosh community to take advantage of this, and 3) as long as Apple is using X86 systems, it won't be *that* difficult to modify OS X to run on a custom system.
Score: 6 Votes (Like | Disagree)

Lesser Evets
I love the MacPro case design, but, owning one, I can see how they could easily compress everything even further. It's a space hog because of the need to kill heat, I think. Can't wait to see how the revision turns out, assuming rumors are true. Once the drives go SS and optical bites it, these machines will be half their current size, easily.
Score: 6 Votes (Like | Disagree)

Custom CPUs could mean the end of Hackintoshes. If Apple gets custom CPUs with custom instructions - they could make it virtually impossible to run Apple OSX on affordable, configurable hardware.

It's not about adding options, it's about locking things down.


Perhaps, but for that to work Apple would have to drop support for existing Macs that use standard, off the shelf Intel CPUs.

Given the small number of successful Hackintosh installs, I doubt Apple is that worried about them. Look at extremely small Psystar's sales figures, for example. What was it? A few hundred sold?

A good many people might be interested in going the Hackintosh route. Some of them might actually try. Some will succeed, but become frustrated with being unable to deal with updates, etc. A few will run them successfully. I really don't see it being something the masses will ever be able to easily master, and thus the number will likely never be huge.
Score: 5 Votes (Like | Disagree)
Read All Comments