27-Inch iMac Core i7 With SSD Is Fastest Mac Ever

Apple's latest edition of the iMac is finally shipping with the build-to-order 3.4GHz Intel Core i7 and 256GB Solid State Drive option installed. As with any new Apple product, benchmarks and speedtests are beginning to trickle out, and the conclusion from Macworld is that this is the fastest Mac they've ever tested.

Last month, Macworld benchmarked the highest standard configuration 27" iMac Core i5 3.1GHz with standard hard drive installed. It scored 227 on Speedmark 6.5, roughly 16 percent faster than the old model -- but still quite a bit slower than a Mac Pro 3.33GHz Xeon 6-core, which scored a 263 on the same test.

Now, after a month-long delay, Apple is finally shipping BTO 3.4GHz Core i7 iMacs with a 256GB SSD option. This top-of-the-line iMac, the 27" 3.4GHz Core i7 w/SSD has been declared the fastest Mac that Macworld has ever tested.


The video above was sent in by a reader. He filmed it on his 27" 3.4GHz Core i7, 16GB of RAM and the 256GB SSD option. He opens all the standard applications that come with the iMac simultaneously (though with Front Row and Dashboard deselected, because they're both full-screen apps) as a quick demo of the speed of his new SSD iMac.

It's important to note, however, that for massively parallel tasks like Handbrake encoding, Cinebench, Mathematica, and GeekBench benchmarks the Mac Pro still outperforms the iMac because it has more cores, especially with Hyper-Threading. But, for individual application tests like encoding an MP3, importing a movie to iMovie, or importing photos to iPhoto, the iMac beats all. 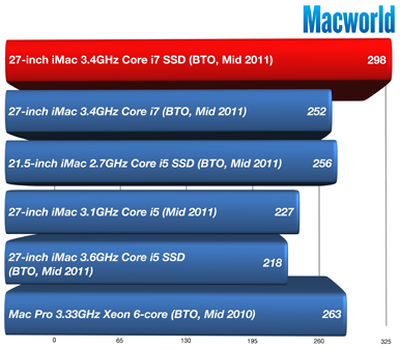 Of course, the brand new iMac might be faster than the current generation Mac Pro, but the Mac Pro hasn't been updated since last July. New Mac Pros are expected sometime soon, presumably with Thunderbolt support and a rumored narrower, rackmountable enclosure.

scottsjack
OMGWTF. Why even waste the time writing an article that mirrors that of another publication when neither of you has tested the iMac SSD against a Mac Pro SSD?

It's like implying that the a current Air with 2GB RAM is better than my late 2008 MBP with 8GB RAM because the Air's puny SSD reacts faster than my MBP's 7200 RPM WD Black drive.

Internetting would be faster but real work? Probably not. If you're going to write articles like this atleast test machines with similar available options.

OMGWTF. Why even waste the time writing an article that mirrors that of another publication when neither of you has tested the iMac SSD against a Mac Pro SSD?

deannnnn
Anyone want to see a video of my 2004 iMac G5 opening all of its apps? It's not quite as exciting.
Score: 10 Votes (Like | Disagree)

Interesting, figured the mac pro would have beat it though


Get a Mac Pro and an iMac rendering, 100% usage on
all cores and see which machine melts and dies first ;-)
Score: 9 Votes (Like | Disagree)

jonnysods
Put an SSD in a Mac Pro and then test.
Score: 8 Votes (Like | Disagree)

what a surprise :s
imagine that it's slower than the previous one :confused: