Thunderbolt iMac Torn Down and Benchmarked

While Apple's new iMac models released yesterday appear nearly identical to their predecessors at first glance, the company has of course made a number of changes to beef up performance of its flagship desktop line. 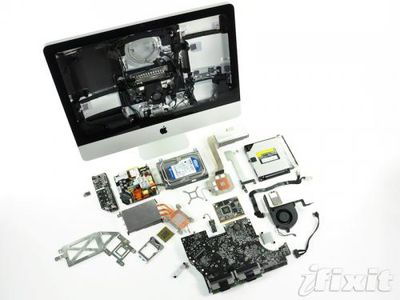 The folks over at iFixit quickly got their hands on one of the new 21.5-inch models and subjected it to one of their thorough teardown routines. Among the interesting findings:

Graphics board and heat sink from new 21.5-inch iMac
- The AMD graphics chip is located on a separate board from the main logic board, allowing for replacement of the GPU without the need for an entirely new logic board. Apple of course doesn't make the GPU board particularly easy to access, as it is not considered a user-replaceable part, but it can be done.

With a bit of magic, the GPU heat sink detaches from the logic board, exposing the AMD GPU board. You heard that right, folks - you don't have to replace the entire logic board if your GPU explodes from too much l33t gaming. You can just swap out the GPU board for another one.

-The new iMac features the same LG display found in the previous generation.

The optional SSD appears to reside beneath the optical drive - that's the only space we could find where something was clearly missing. There's three mounting points under the optical drive that have nothing attached to them in our machine, since this option is only available on 2.7 GHz 21.5" iMacs.

The previous-generation iMacs only supported secondary SSD drives on 27-inch models, with the bay positioned next to the optical drive. The bay may still be in that location on the new 27-inch models, but Apple clearly had to find a different layout for the internal components in the smaller body of the 21.5-inch model in order to fit the drive in.

Separate from iFixit's teardown, reviewers have also begun benchmarking the new iMac models with Macworld having already put the new 3.1 GHz 27-inch model through its Speedmark 6.5 testing suite. Unsurprisingly, the machine was found to be significantly faster than the previous generation.

Comparing to other machines, the new iMac clocked at about 10% faster than the standard high-end 15-inch MacBook Pro and about 15% slower than a build-to-order six-core Mac Pro.

Macworld will be subjecting the other three standard-configuration iMac models to the same battery of tests to provide comparison data.

lazyrighteye
Still impressed by what they manage to cram inside these machines...
Score: 5 Votes (Like | Disagree)

Well, it's not jut CPU. Apple will not tell you SKU for any of the components. All iMac components are regular PC components so if a buyer knew the part list s/he would make an educated decision and iMac would lose every time.


I don't think it would be a surprise to anyone to hear there's a generous mark-up on Apple products. It's for the consumer to decide if that's worth paying for or not. There are market forces after all, if it was too expensive, not enough people would buy them - but that doesn't seem to be a problem they're having at the moment.

Still, they are more than the sum of their parts, other companies are free to pick those parts off the shelf and put together something the same or better than the iMac for less. None of the competitors have impressed me with their attempts so far though. I'd be interested to see the cost of the 27" IPS display as well, doesn't strike me as a bargain bucket component.
Score: 4 Votes (Like | Disagree)

Why won't they just give the cpu sku, it would make it much easier to compare than ghz values, with turbo, ht, vt enabled and what not.

Apple marketing don't think those things matter. You can find all the info easily at ark.intel.com and the information is in plenty of threads in the iMac subforum.

any care to fill out the rest?

What exactly is so "elegant" about requiring the disassemble of half the computer just to change out the GPU?

It's not meant to be user serviceable. It's sold as an "appliance". In order to achieve the slim profile and silent performance, the jigsaw construction is very similar to a laptop.

That said, the replaceable GPU is intriguing. The worrying bit is:

Making the LCD and glass spotless when reassembling the machine is nearly impossible.

I wonder if ThunderBolt is fast enough to allow an external GPU that exceeds the performance of the 6970m? Bus to external GPU. GPU to display via Target Display Mode.
Score: 3 Votes (Like | Disagree)

i wonder how much apple pays to assemble these? one would think it's cheaper to put a tower or something similar together than an all in one

Since when does Apple try to lower prices by making something less elegant and appealing to a wide audience? Price is no restrictor (compared to others)!!! :)
Score: 3 Votes (Like | Disagree)

Magnetic ... glass isn't magnetic ... only iron, nickle, cobalt are magnetic. Your suggestions are even possible ... learn physics before you suggest crazy ideas like this.


Calm down, no need to be rude, especially given that the guy was right.

The glass panel is held on by magnets - I've probably taken apart 50 iMacs so I would have an idea.

If you don't believe me, find something ferrous in your house and wave it around the edge of an iMac's glass panel, you'll notice it get attracted to the 10 or so magnets hidden behind.

What the guy is suggesting is possible, just very unlikely to happen because the bare LCD is so fragile.
Score: 2 Votes (Like | Disagree)
Read All Comments