iCloud.com to Offer at Least Some of MobileMe's Web Functionality

While Apple's iCloud introduction at WWDC offered a lot of new information, Apple has been quiet as to exactly what this means to the future of MobileMe's web apps such as email and calendar. In fact, it took a Steve Jobs email to find out the fate of Apple's iWeb hosting services.

Let's be clear about what happens when iCloud goes live -- according to what was described on stage at the event, and what I've confirmed with Apple PR —--the service will effectively replace the current web offerings of MobileMe. That means that when the cutoff date of June 30, 2012 comes around for users, the web-based email client, calendar, contacts app, and other components of the web suite will cease to exist.

But it seems that isn't the entire story. Apple has already started mirroring at least some of the existing MobileMe functionality on iCloud.com as well. 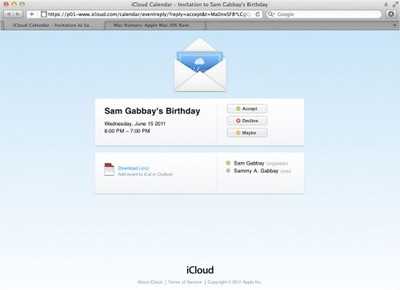 Following this iCloud link shows an iCloud based error page in the same theme.

So, Apple does appear to be working on the web support interface for iCloud but isn't ready yet to talk about it, and at least some of the functionality appears to be based on the existing MobileMe codebase.

Saturnine
I never, for a second, thought that there *wouldn't* be a web-based e-mail app for @me.com addresses. Didn't even cross my mind.
Score: 7 Votes (Like | Disagree)

all of my personal emails are from mobile me/dot mac. Switching all my emails i get from stores, banks, people etc is going to be a pain in the butt (which is why i always renewed my dot me/mobile me account) I would like to know what is going on with the mail part.

I also like idisk. I could easily send larges file to work if the FTP wasn't working for some reason. It was so simple.

Apple have clearly stated that mobile me & dotMac addresses will remain after the switchover and be accessed through icloud.
Score: 5 Votes (Like | Disagree)

juicedropsdeuce
Wait.
Who the heck is Sam Gabbay?
Score: 4 Votes (Like | Disagree)

Get DropBox, it's as simple to share files, and it works better than iDisk AND it works on any Windows machines you use, too.


Dropbox works better than iDisk, agreed. But minor correction: iDisk works with Windows. You can mount it like any other drive. It's just WebDAV.
Score: 3 Votes (Like | Disagree)

Meriana
That was to be expected, webmail, contacts and calendar online is a MUST today if they want to keep up with th competition.

Maybe they will even offer photogaleries, blogs withn the 5GB server space each user has.

And i still hope for mx dns records, i'd pay good cash for those.
Score: 3 Votes (Like | Disagree)

This. What happens to mobileme email accounts?


MobileMe Mail will work as normal in iCloud. You can use you @me.com address or open a new free @me.com one.
Score: 2 Votes (Like | Disagree)
Read All Comments