50% of iPhones Brought to Genius Bar Have Never Been Synced

Fifty percent of iPhone owners who have iPhones swapped at the Genius Bar have never plugged them into a computer to backup or sync. That's according to a "little birdie" that former Macworld Associate Editor David Chartier (now at AgileBits) knows. It also suggests iCloud will save a lot of headaches and lost data. 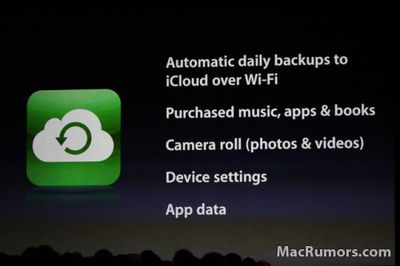 This is a big reason, according to this birdie, for why Apple Store Geniuses are excited about iCloud.

Backupophobes can get away with never touching iTunes after activating an iOS device. But folks obviously need to plug them into some kind of power source to recharge which, combined with a reachable WiFi network, is what triggers iCloud's automatic backup feature. Sure, these customers can manually reinstall apps one by one from the store, but they have no way to recover any of their data or media purchased on the device. That holds true for contacts, too, if users didn't sign up for MobileMe or even Google's free (and, in my experience, terrible) contact sync.

Apple's iCloud, with automated wi-fi sync and instant backup to the cloud will be a welcome feature for those millions who never sync or backup their current iOS devices.

arn
I find I've been syncing my iPhone less and less. Before I would very regularly. now, I'll go weeks without.

goatless
No wonder they're at the Genius Bar.
Score: 18 Votes (Like | Disagree)

GeekLawyer
Wow, I can't even conceive of that. Never backing up? So, also, never updating the OS?
Score: 14 Votes (Like | Disagree)

NightFox
This is a great reality check for a lot of posters on these forums who think Mac Rumors members are a good representation of the wider iPhone owning community. We're not, we're a geeky minority. The majority of iPhone owners neither know nor care what iOS, WWDC or iCloud are.
Score: 10 Votes (Like | Disagree)

The dumbing of society starts by making things "Simpler"

These are the clueless folks having computer problems and blaming it on everything but themselves...

I know plenty of lawyers, for example, some of them top litigators (i.e., in Toronto) that aren't very bright when it comes to tech. When it comes to figuring out public policy and legislation, however, they're stars. But work in that industry and witness it for yourself.

Understanding tech is no signifier or marker of intellect. Tech is a tool, that's either comfortable to use to get actual work done, or it isn't. And a lot if it isn't.

It's often a case of smart people using bad tools. There's going to be friction.

This is where Apple comes in. And consumers have responded - from what appears to be all walks of life, especially a lot of smart people that have traditionally shied away from tech or felt intimidated by it. There is simply a lot of bull.sh.it when it comes to tech - a lot of stuff that gets in the way. It can be a huge PITA. Whoever can simplify it while allowing us to get most of the same things done will be a star. Apple is one of these stars. The industry has taken notice and is going through growing pains to shift toward Apple's model - some with more success than others.

Remove complexity, enhance what's left over. Working from that model, we end up with blessings, not headaches.
Score: 8 Votes (Like | Disagree)
Read All Comments