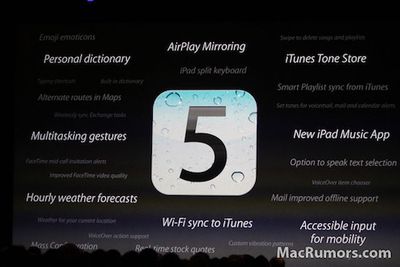 Since the release of first iOS 5 Beta last week, people have been diligently documenting all the new features Apple has introduced in the upcoming version. Apple claims over 200 new features have been added, but have only spelled out a fraction of those. On our iPhone/iOS Blog we've already covered some of the biggest changes. These include:

MacRumors forum user hellomoto4 has compiled a longer list with screenshots of many of the new findings, such as:

The most complete list of changes we've seen, however, is from forum user benna who has compiled 153 changes/features as of this writing. There are some duplicates and only a few screenshots, but it's the most exhaustive list we've seen. Here are some excerpts of some of the more interesting changes:

- You can choose what applications to be included in Notifications Center
- Ability to Set Left or Right for Mono Audio
- You can create additional @me.com email address within the Mail settings
- New Private Browsing option in Safari
- Set custom text tone for each contact.
- You can use your phone while its being synced with iTunes.
- Multitasking Gestures in iPad. Use four or five fingers, swipe up to reveal the multitasking bar, pinch to return to the Home screen, and swipe left or right to switch between apps.
- Camera, use two-finger spread/pinch gesture to zoom in/out accordingly (Thanks @Alan)
- When your alarm goes off you can snooze it from lockscreen or slide to turn off
- Ability to set maximum messages downloaded through email to 1000 instead of 250
- Links can be opened in the background

iOS 5 is presently in developer beta release and will be released to the public in the fall of this year.

I have a feeling that Apple is purposely holding back on some big new iOS 5 features for the unveiling of the next iPhone, like Nuance speech recognition, etc.

If the hardware will be largely similar to the iPhone 4, they will need some new "wow moments" for the keynote, and I don't believe for a second that the 10 new features they focused on at WWDC are the only crown jewels of the new OS.
Score: 11 Votes (Like | Disagree)


Been doing that for ever!
Score: 8 Votes (Like | Disagree)

We could probably do without this one.
Score: 7 Votes (Like | Disagree)


This has always been possible in iOS from the start.
Score: 6 Votes (Like | Disagree)

southernpaws
I followed the link and read the article on ieatapples.

I was amused by the part where it talked about how developers are "pissed" at the reminders and camera apps. It pretty much falls into the "competition is good!" category. If they want to keep their apps alive, they need to update their apps with new ideas. Did they think they'd be able to come up with something and just coast on the idea for years? Development isn't a cakewalk, and people who treat it like such, or who got on board thinking they'd be able to make a quick buck, should fall to the wayside and make room for more committed developers.

I admire the guy from instapaper. at first, he was upset that apple duplicated his functionality. Then he basically said "well. Time to start coming up with some new updates and new functionalities." He will do fine because he'll always look to stay ahead of the curve, and those are the developers that are worth buying from.
Score: 4 Votes (Like | Disagree)
Read All Comments