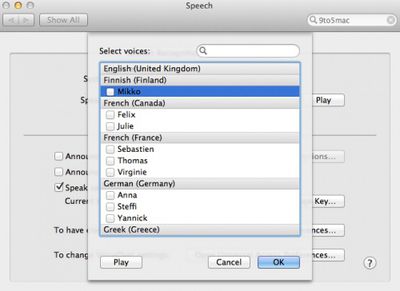 Last month, we noted that Apple had integrated a number of new text-to-speech voices from Nuance in OS X Lion. While the voices themselves were not yet able to be installed in the Lion developer preview, samples available online demonstrated the significantly improved quality over existing voice options in Snow Leopard.

Several users working with the latest OS X Lion developer preview version released earlier this week following the WWDC keynote have reported, however, that the voices can now be installed.

Apple has been reported to have been working on a deal with Nuance to include some of the company's speech recognition technology in iOS 5 and in its new North Carolina data center. And while no Nuance-related announcements were made at WWDC earlier this week, sources have indicated that such integration may still be coming.

Apple and Nuance have a bit of an existing relationship via Siri, a company focused on virtual personal assistant software that was acquired by Apple last year. That application has been powered by Nuance technology, and integration of Nuance voices into Lion may signal an increased collaboration between the two companies.

Update: As reported by Netputing, the voices became active several weeks ago, although many users are apparently just now noticing the change as they test out the latest build. (Thanks, Seth!)

I'm a new father. So now on weekends, my hands (and eyes) are pretty tied up with lil' man. Where I used to sit and read on those mornings, I now use TTS to read to me whilst my hands/eyes are needed elsewhere. And it's actually pretty nice. Completely usable. Sure, improved voices (more natural?) are welcomed. But overall, I find it an effective use of TTS.

Curious to hear others' uses...

I have used it to proof read documents to me, it is really quite a good way to spot mistakes or odd turns of phrase.


I have used it to proof read documents to me, it is really quite a good way to spot mistakes or odd turns of phrase.

Also very useful for those with limited eyesight.
Score: 3 Votes (Like | Disagree)

I have a throat disorder and couldn't speak for about a year and a half, during which time my MBP and the built-in text-to-speech doing a Stephen Hawking impression was the only way I could functionally communicate without someone looking over my shoulder and reading what I was typing, which doesn't work at all with a group of people. I only wish these voices had been built-in at the time; I didn't have the money to pay for the better voices, and that was before even the current best built-in voices, so I really did sound like Stephen Hawking.

And then of course there's the famous scientist himself, who has been relying on the same technology to communicate with the world for years.
Score: 2 Votes (Like | Disagree)

zeemeerman2
The only thing I ask is to put GLaDOS as an option for a Text-to-Speech voice.
Score: 1 Votes (Like | Disagree)

Analog Kid
First, I think the reason we didn't see more speech stuff in the keynote is because those features of iOS 5 won't be available on current hardware.

So, can I use the German voices to speak English with an accent? That would be awesome!

As to the debate about the value of text-to-speech, I think people are too caught up in the "text" part-- this isn't about selecting a bunch of text and choosing "speak selection". That ability is critically important as an assistive technology, but there are many other uses that the majority of users could reap from this that require better voices to make tolerable.

Nagromme had a good list, but it has the potential to change how we interact with our devices. I'd like my computers to be able to tell me who an incoming email is from so I don't need to go and look. It would be nice if my computer could nicely remind me of an upcoming appointment. There are a number of applications I'd like to be able to interact with by voice, ranging from iTunes, to home automation, to office applications.

Most of this requires both speech recognition and voice feedback, and one of the main reasons I don't even try the existing voice capabilities is that I find the computer voices really unpleasant to listen to. Apple needs to make improvements on both ends of the system in my opinion.
Score: 1 Votes (Like | Disagree)

Solowalker
There's also the Service that can send text as speech to iTunes as a track (not on my Mac so I can't give the exact verbiage or screenshot). This can make all kinds of uses such as those mentioned already even more useful because you can sync them to your iDevice and not need your Mac to play them. Especially useful for making your own audiobook or new program.
Score: 1 Votes (Like | Disagree)
Read All Comments