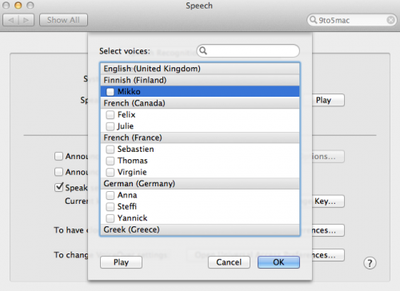 Lion Speech control panel (via 9to5mac)
Late last week, Netputing revealed that Mac OS X Lion Developer Previews include an option to install new text-to-speech voices. The voices were actually found to be identical to voices from a Nuance speech product, seemingly confirming that Apple will be using Nuance technology in Mac OS X Lion. The voices aren't quite yet usable in Lion, as Netputing notes that you currently get an error message in Lion when trying to install them. OSX Daily, however, points out that the voices are available online for sample:

The new voices are distinct improvements over the previous text-to-speech voices.

Rumors had pegged Apple's Nuance negotiations to be centered around iOS 5 rather than Mac OS X Lion, although there could be a broader agreement between the two companies. Apple's interest in Nuance seems primarily due to their speech recognition technology rather than text-to-speech functionality, as Siri had used Nuance to power their voice-activated search. Apple acquired Siri in April 2010 and is expected to integrate its technology into iOS.

Oh well, I was hoping they had innovated something in the last 4 years, and had voices that could actually read a sentence with coherence. Guess not. Here's hoping for 10.8 in 2015.
Score: 4 Votes (Like | Disagree)

palmerc2
how about a sexy voice? make it interesting!
Score: 3 Votes (Like | Disagree)

Eso
Man, those voices are terrible. The guys at Neospeech (http://www.neospeech.com/) put them to shame.
Score: 2 Votes (Like | Disagree)

velocityg4
I'd like a voice that sounds like HAL from 2001 A Space Odyssey. Maybe a good C3PO and Enterprise computer voice (Majel Barrett).

Perhaps they should make a system for just adding your own voices. With sample texts to read for generating all sounds in a given language. Then people good at impersonating these voices can post them online.

Just like I have a good Yoda and decent Darth Vader for my Tom Tom. Before the official voices were released. Though I realize these are not as thorough as all sounds of a language.

I'm sure many enthusiast would create good voices.

What I wonder is when performing text to speech. Does the software just look at the word and try to pronounce it? Or does it have a dictionary to work off the phonemic representations of the words instead for all 200,000+ English words, while guessing on misspelled words and proper nouns.
Score: 2 Votes (Like | Disagree)
Read All Comments