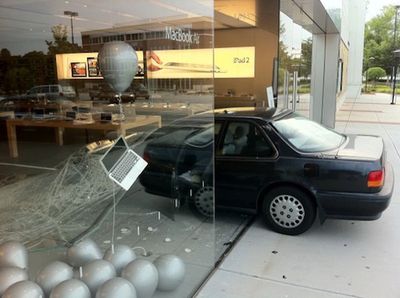 MyFOX8.com reports that a man wearing what was referred to by witnesses as a "white ninja suit" crashed a car into Apple's Friendly Center retail store in Greensboro, North Carolina this morning. The incident appears to have been a robbery attempt, although the man reportedly fled the scene without stealing anything.

Police said the car involved in the accident was reported stolen around 6 a.m.

The store will be closed at least through the remainder of the day as staff work to clean up the site.

baleensavage
This is why ordinary people shouldn't attempt to be ninjas. :rolleyes:

This non-ninja made 3 vital mistakes
1. There were witnesses that saw the ninja. Everyone knows that the only time that you see a ninja is right before you die.
2. Said witnesses are still alive, enough said.
3. Driving a car into an Apple Store? Really? Could you be any more un-ninja?

If this had been a true ninja the story would have read something like...

MyFOX8.com reports that a car was mysteriously thrown into Apple's Friendly Center retail store in Greensboro, North Carolina this morning. All the store staff and customers were slain in what appears to be a brutal ninja attack. One store employee was barely alive when the police arrived on the scene and is said to have whispered the words "white ninja" before he died.

akm3
It took Apple nine months longer to get white ninja attacks vs. the normal ones.
Score: 5 Votes (Like | Disagree)

whooleytoo
Serious kudos to the first developer to make this into an iOS game.

"White Ninja Assassin. How many Apple Stores can you take out before you're caught? Have you been hit over the head with the Genius Bar? We don't think so...."
Score: 4 Votes (Like | Disagree)
Read All Comments