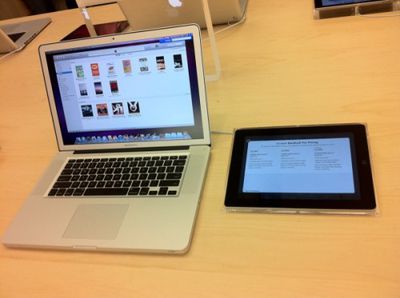 Photo by @Leoleakey
The much hyped retail meeting took place overnight in several parts of the world. Apple seems to have deployed major updates to their Retail stores including the use of iPads as interactive kiosks for customers. MacPricesAustralia posted some early details (via 9to5mac):

MacStories offers some additional shots of the iPod display:

Some observations: the interactive iPads aren't powered through the Dock connector. The cabling disappears behind the iPads. The home buttons don't do anything.

Very nice! They're kinda going green by not wasting paper/plastic every time a price is changed.


but they are using more electricity ;)
Score: 19 Votes (Like | Disagree)

DavidLeblond
Am I the only one that looks at it and says "thats one too many cables laying around on that table." I think it looks ugly.
Score: 17 Votes (Like | Disagree)

Very nice! They're kinda going green by not wasting paper/plastic every time a price is changed.

mattdo93
Am I the only one who doesn't mind keeping the old price tags? :confused: That's a big power drain right there for Apple.
Score: 9 Votes (Like | Disagree)
Read All Comments