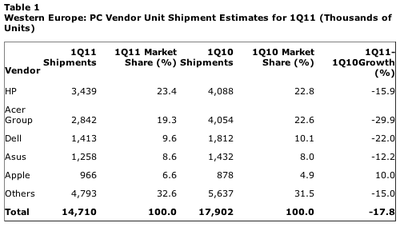 Earlier this week, research firm Gartner reported that Apple broke into the top 5 PC manufacturers in both the United Kingdom and broader Western Europe markets for the first time in the survey's history in the first quarter of 2011. Apple's year-over-year shipment growth of 10-15% in those markets bucked the trend that saw all of the other top manufacturers see a decline in shipments, a performance that saw the overall market shrink by over 17% compared to the first quarter of 2010.

In the United Kingdom, Apple displaced Samsung to grab the fifth spot in unit shipments.

This comment so flawed in so many ways I don't know where to begin and considered not even trying but (possibly to my own detriment) could not help it...

I think that Toshiba, Samsung, Sony, Lenovo, and the others that make up that whopping 32.6 pct of the market would beg to differ with you that "there are basically 5 computer vendors in the world...". Furthermore, comparing Apple to the fictional "Wintel" makes about as much sense as comparing Toshiba to all the "Untoshibas". Apple does need to capture all of the market to be successful - they don't even need to capture 50% of the market or anywhere near it. In fact, since their margins are so much higher than their competitors, capturing "only" 6% of the market also means that they capture closer to 15% to 20% of the profits in the industry (I may be off a bit there but, if so, it's on the low end). The same goes for smartphones where they make something like 60% of the profits in that market.

Lastly, to your last point it's VERY hard to increase shipments by 10% when the rest of the industry is decreasing by 15.7% - this is showing a fundamental shift away from "Wintel" and won't just benefit Apple but also Android and potentially ChromeOS at some point down the road. Since more of what consumers are using a computer for these days does not require Windows (and in may cases any specific software application) accessing the web is enough and the OS is not as critical. Apple is benefiting because of the ecosystem with iPod, iPhone, Retail stores and customers who just like the Mac OS interface, IMO (or Apple's products, Apple as a company, etc.). This benefit is also starting to extend to Google and makers of Android devices.

Top 5 ain't saying much since there are, ahem, basically 5 personal computer vendors in the WORLD. :) Dell, HP, Apple, Asus, and Acer (as listed of course).

At the end of the day, Apple still has 7-8% of worldwide personal computer market share...while the Wintel business model has 80%+. It's also not hard to "increase shipments" when you only have 6% market share. Everyone else (the top 4) has sold bazillions.

Mac news relegated to the blog and an eBay sale on an Apple prototype gets page 1. :confused::confused:


Welcome to the so called Post-PC world. :rolleyes:
Score: 1 Votes (Like | Disagree)

At the end of the day, Apple still has 7-8% of worldwide personal computer market share...while the Wintel business model has 80%+. It's also not hard to "increase shipments" when you only have 6% market share. Everyone else (the top 4) has sold bazillions.

We never see numbers for hardware revenue, and we don't see numbers for profits either. In the smartphone market, Apple has a similar small share in unit sales, but takes 60% of the total profit in that market.
Score: 1 Votes (Like | Disagree)

rdowns
Mac news relegated to the blog and an eBay sale on an Apple prototype gets page 1. :confused::confused:
Score: 1 Votes (Like | Disagree)

ericinboston
Top 5 ain't saying much since there are, ahem, basically 5 personal computer vendors in the WORLD. :) Dell, HP, Apple, Asus, and Acer (as listed of course).

At the end of the day, Apple still has 7-8% of worldwide personal computer market share...while the Wintel business model has 80%+. It's also not hard to "increase shipments" when you only have 6% market share. Everyone else (the top 4) has sold bazillions.
Score: -2 Votes (Like | Disagree)
Read All Comments