iPad 2 Launches in China to Long Lines and Sellouts 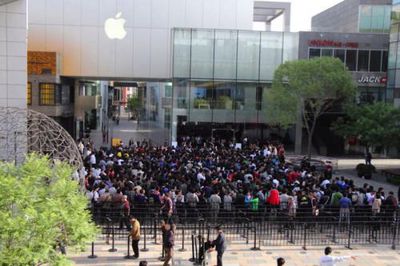 iPad 2 line at Apple's Sanlitun retail store in Beijing
Apple yesterday launched the iPad 2 in China, officially bringing its six Wi-Fi capable models (three black and three white) to the country for the first time. M.I.C gadget has an extensive gallery of photos from the launch at Apple's Sanlitun retail store in Beijing, where hundreds of customers waited in line for the 8:00 AM launch and supplies sold out in just four hours.

Final staff briefing before launching the iPad 2 at Sanlitun retail store
Apple also launched sales through its online store in China, debuting with shipping estimates of 1-2 weeks. But even those supplies quickly dried up and the company's online store has stopped taking orders for all six models of the device, simply noting "no supply" as a shipping estimate.

Apple has placed considerable focus on building out its presence in China, with the company's four retail stores in the country ranking as the highest-grossing locations in the company's chain of over 300 stores. The company publicly stated in early 2010 that it planned to open up to 25 retail stores in China over the following two years, although the company has reportedly scaled back on the planned number and slowed the development slightly as it has shifted its strategy toward larger, more iconic stores.

Last October, the company opened a Chinese version of its online store as well as a Chinese-language edition of the App Store.

Right if you say so. Please do stroke those specs as much as you want. I will stay with my sweet smooth and sexy ipad 2

Jaymes
I don't think that photo qualifies as a long line in China. Folks are probably arriving excited to be "only" number 1375.
Score: 4 Votes (Like | Disagree)

Atlantico
Great that Apple's iPad is successful in China too! Isn't it all over the world anyway? :P

But to put a little perspective on the line. China has a population of about 1300 million people, and 4 Apple retail stores. A considerable amount of these people are 'middle-class' or higher. That's a lot of people per store.

I would expect long lines :)
Score: 2 Votes (Like | Disagree)

deadkennedy
I like how China has progressed into a developed nation. Sure they have problems, but I can certainly see them as being the world's greatest superpower by 2025.
Score: 2 Votes (Like | Disagree)

Dr McKay
Almost as many negatives as positives.

Disgruntled Americans, thinking it shouldn't be launched in another country when USA is having shortages?