Transcript of Interview With Apple Executives on iOS Location Tracking 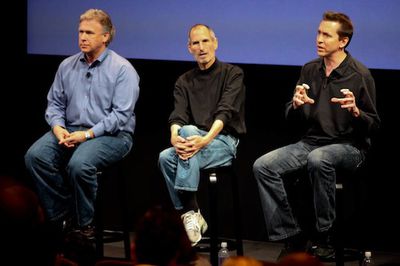 Phil Schiller, Steve Jobs, and Scott Forstall at iOS 4 introduction (Source: CNET)
Earlier today, All Things Digital conducted a telephone interview with Steve Jobs and other Apple senior executives, covering the location tracking controversy and white iPhone 4 delays. All Things Digital has now followed with a full, edited transcript of the portion of the interview covering the location tracking issue.

In the full interview, Jobs discusses why it took Apple nearly a week to respond to the issue, noting that the company needed to take the time to investigate the situation and figure out how best to relate the information to the public.

"We're an engineering-driven company," Jobs said in a telephone interview Wednesday. "When people accuse us of things, the first thing we want to do is find out the truth. That took a certain amount of time to track all of these things down. And the accusations were coming day by day. By the time we had figured this all out, it took a few days. Then writing it up and trying to make it intelligible when this is a very high-tech topic took a few days. And here we are less than a week later."

Most of the other points of the interview were covered in the earlier highlight piece, but the full transcript also includes new details about how the location database works and about Apple's views on user control over location services.

When pressed on what services Apple might be developing using location information, Jobs referred only to the potential traffic service disclosed in the official Q&A, declining to expand on that with additional information or possibilities.

Why does it take a media storm for Apple to open up on an issue ? It would be so much better if they more forthcoming and frank befoe an issue snowballs.


You are very, very negative.
Score: 9 Votes (Like | Disagree)

Why does it take a media storm for Apple to open up on an issue ? It would be so much better if they more forthcoming and frank befoe an issue snowballs.

As they said, it has been a week. It is not really there fault that the media instantly makes a storm out of every Apple issue.

if they are not tracking people then why have the feature? maybe the information is for someone else??... who knows but one thing is for sure its an invasion of privacy..... even if I do stay home all day and night.

It is clear from your reply you did not read the transcript or any thing else on this issue...
Score: 7 Votes (Like | Disagree)

Al Coholic
Then writing it up and trying to make it intelligible when this is a very high-tech topic took a few days. And here we are less than a week later."


Translation: We are Apple. We know you're stupid.
Score: 5 Votes (Like | Disagree)

....because Apple says nothing and allows it to fester.


It's been a week; a week is hardly enough time for anything to fester.
Score: 5 Votes (Like | Disagree)

if they are not tracking people then why have the feature? maybe the information is for someone else??... who knows but one thing is for sure its an invasion of privacy..... even if I do stay home all day and night.

How? That's like saying that Adium reads your chat transcripts because they are saved locally...
Score: 5 Votes (Like | Disagree)

ok its nice to read the transcript, but these accusations that apple is is tracking users is stupid and retarted