MIC Gadget posts a photo of what they claim could represent the "iPhone 4S". The image shows what looks like a while iPhone 4 but with a slightly larger display.

Man, we dont know if this is real, but at least we can see that it has a larger display and edge-to-edge glass. Maybe its a mockup, but we are sure that its not an iPhone 4.

They offer no explanation as to how they obtained the images and don't seem that confident in the authenticity of the images. The images could obviously be easily doctored.

They also provide a comparison photo between the current iPhone 4 and the larger screen, but this time on just the screen part, not a full device:

The new screen part, however, lines up closely to the design drawings documents that were leaked in the past, which may offer some possible validity to the images.

Another recent rumor claimed the iPhone 5 would carry a 3.7-inch display, but we've since heard that report is inaccurate -- at least for the upcoming iPhone 5.
Tag: micgadget.com
[ 195 comments ] 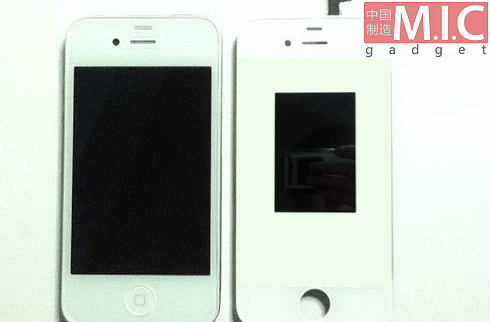 Doesn't look too bad but on the other hand, the screen doesn't even look that noticeably bigger either (to the point of, "What is the point?"). And if even resizing it like that would make developers have to re-do their apps (I don't know how that works but I've heard people say with how iOS works, re-sizing would mean having to re-program apps), I'd say it's not worth it.

(I'm one of the ones who don't want a bigger screen due to the fact I don't want a bigger phone and I don't think they could squeeze a bigger one in without sacrificing usability and/or aesthetics. Bezels are useful for giving you some area to grip. This one doesn't look too bad for my concerns but honestly, it doesn't seem to give you a noticeable increase in screen size).


Resizing only means having to rewrite apps if the screen resolution changes -- especially if it changes by something other than a whole-number multiple (e.g. 1.5x versus 2x). All rumors indicate a 3.7-inch screen iPhone would have the same Retina-Display resolution (still maintaining over 300dpi).

Technically their "Retina-Display" stuff is based also on typical viewing distance as well -- so a "Retina Display" iPad, iMac, or MacBook (assuming those are in the works) may not go as high as 300dpi. However, a Retina-Display iPad would like require the same pixel-doubling (2x) that was done for apps not optimized for the Retina Display until updates came that included higher-resolution graphics.
Score: 8 Votes (Like | Disagree)


I don't think so... They skipped iPhone 2 and iPhone 3 and went right to "iPhone 4" because it was the 4th generation. Why wouldn't they call it iPhone 6 if it's the 6th generation?
Score: 5 Votes (Like | Disagree)

he's not the only one still boasting a first-gen iPhone! ;)
I'm still lovin' it!


That's because :apple: didn't kill your phone with an iOS update
Score: 4 Votes (Like | Disagree)

If it's a fake, whoever did it did a pretty interesting job on it.

I mean we had:

why not
iphone 4
iphone 4gs

Which would give incentive for people to go for the white one I guess.

then the 5 comes out later?

Wednesday April 21, 2021 10:31 am PDT by Juli Clover
Schematics stolen from Apple supplier Quanta Computer outline Apple's plans for the next-generation MacBook Pro models that are expected in 2021, and clearly confirm plans for additional ports and a return to MagSafe. MacRumors saw the schematics after they were leaked online, and some of them feature the logic board of the next-generation MacBook Pro. On the right side of the machine,...
Read Full Article • 505 comments

Tuesday April 20, 2021 4:23 pm PDT by Juli Clover
Apple today held its first event of 2021, and it was one of the most exciting events that we've seen in some time. Apple announced a whole slew of new products, including an M1 iMac, an M1 iPad Pro, a refreshed 4K Apple TV, and the long-awaited AirTags. Subscribe to the MacRumors YouTube channel for more videos. It took Apple an hour to introduce all of the new devices during its virtual...
Read Full Article • 127 comments