Apple Cracking Down on 'Offer Walls' for iOS Apps 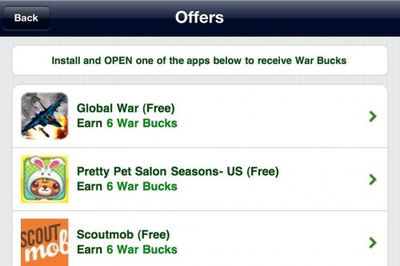 In a pair of reports yesterday and today, Inside Mobile Apps reveals that Apple has apparently made a shift in enforcement of its App Store rules, changing the way it ranks applications to include more than simple download numbers and rejecting applications that take advantage of so-called "offer wall" services that reward users with virtual currency or credits for installing other applications. The idea is a practice that developers have been increasingly turning to in order to boost their applications into Apple's charts of top apps.

The first report, issued yesterday, reveals that Apple has indeed made changes to its rankings. The changes were first noticed by mobile ad networks and offer wall companies.

"We've been noticing changes in the Top Free rankings for at least three days now," said Peter Farago, vice president of marketing at Flurry, which serves 80,000 applications with its analytics product. "From our point of view, Apple is absolutely considering more than just downloads, which we believe is the right direction to go in to measure the true popularity of an app." Other pay-per-install networks tell us they've been detecting these changes too.

While it's too early to tell exactly what the new weights are, a reasonable hypothesis would be that Apple is considering factors such as active usage. But we'll keep talking to top developers and ad networks to learn more as we go.

In a follow-up report today, Inside Mobile Apps notes that Apple has begun rejecting offer wall apps entirely, citing a clause in its App rules that prohibits developers from manipulating user reviews and chart rankings.

Developers began receiving rejection notices for dozens of apps late last week and yesterday, saying that they are prohibited from having offer walls. Apple looks like it is changing the interpretation of clause 3.10 in its developer agreement, which says, "Developers who attempt to manipulate or cheat the user reviews or chart ranking in the App Store with fake or paid reviews, or any other inappropriate methods will be removed from the iOS Developer Program." It's uncertain what will happen to the thousands of apps that have already been approved and have offer walls.

Companies such as Tapjoy that provide offer wall services for developers are of course defending their practices, pitching them as all-around wins for advertisers, developers and users to help target advertising, boost app installs, and earn free content for users. These firms appear to have been caught off-guard by Apple's sudden shift, and it remains to be seen how things will play out.