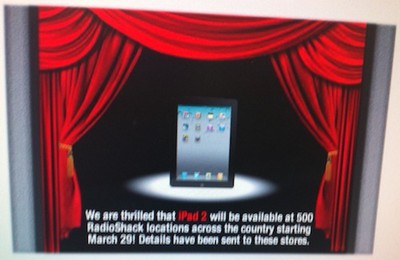 A MacRumors reader has just sent us the above photo claimed to be of an internal notice from RadioShack announcing that the retailer will begin carrying the iPad 2 at 500 of its locations around the United States as of tomorrow.

We are thrilled that iPad 2 will be available at 500 RadioShack locations across the country starting March 29! Details have been sent to these stores.

Apple has struggled to meet early demand for the iPad 2, both in the United States and in the over two dozen other countries that saw the device launch on Friday. Shipping estimates for new online orders remain at 3-4 weeks in all of Apple's online stores, and stock coming into retail stores has been very limited, although improving somewhat in recent days. With RadioShack adding another 500 distribution points for the device, further strains may be placed on Apple's supplies, although presumably the company has selected tomorrow for the new rollout based on projections of continued improvement in availability.

Update: Representatives at multiple RadioShack locations have confirmed that they are scheduled to begin offering the iPad 2 tomorrow, although launch stocks are currently unknown.