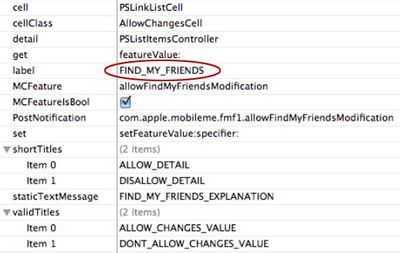 Some further digging into the newly released iOS 4.3 developer build has revealed settings for a new feature called "Find My Friends". The strings are associated with the Settings app and is related to "MobileMe". The obvious interpretation is that Apple may be looking to offer a location-based friend-finding service like Loopt and Google Latitude.

Services like Loopt allow you to find your friends who near you at any given time by leveraging your mobile phone's GPS signal. The constant updates can broadcast your location to your friends to know who is nearby. Obviously, these sort of systems are opt-in only, but shows what Apple maybe up to in fleshing out their MobileMe service. Steve Jobs wrote in an email in December that the MobileMe service will get "a lot better in 2011".

Thursday September 29, 2022 12:38 pm PDT by Juli Clover
Tony Blevins, Apple's vice president of procurement, is set to depart the company after he made a crude comment about his profession in a recent TikTok video, reports Bloomberg. Blevins was in a video by TikTok creator Daniel Mac, who was doing a series on the jobs of people he spotted with expensive cars. After seeing Blevins in an expensive Mercedes-Benz SLR McLaren, Mac asked Blevins what ...
Read Full Article • 604 comments