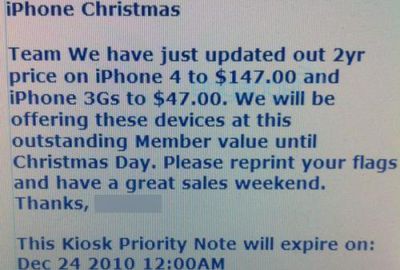 If you've been holding out for the iPhone 4, a few recent deals have emerged that have uncharacteristically discounted Apple's current generation iPhone. Earlier this month, a Radio Shack offered $50 off the iPhone 4 for a limited time (now over), and now Sam's Club is expected to offer a similar discount, according to a leaked memo on Engadget.

We've been tipped off to Sam's Club now offering the AT&T-locked device for a $147 fee, subject to the usual two-year agreement. This offer will run all the way until Christmas day, so if you have to have the cheapest possible fourth-gen iPhone, this'll probably be it.

The offer is only valid until Christmas, and you must be a member of Sam's Club which comes with its own annual fee.

The 16GB iPhone 4 currently retails for $199 at other outlets, and either price requires a 2 year contract with AT&T.