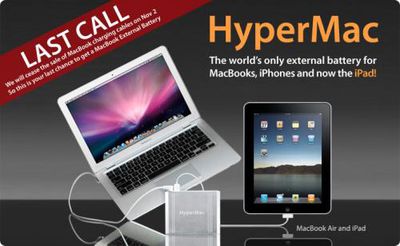 Engadget notes that Sanho, maker of the popular HyperMac line of external batteries for Apple notebooks, will halt sales of the MagSafe charging cables required for connecting its batteries to Apple's machines as of November 2nd. The move comes as the company attempts to work out a licensing agreement with Apple to offer the MagSafe interface.

As part of our ongoing comprehensive licensing negotiations with Apple regarding a wide array of technologies and issues, we have decided to cease the sale of the MacBook charging cables and car charger on November 2, 2010.

While we will continue to sell the same batteries together with the rest of our product line after November 2nd, they will not be able to charge MacBooks without the cables.

Apple filed suit against Sanho early last month over the accessory company's use of the MagSafe interface, alleging patent infringement. Sanho had hoped to escape the eye of Apple by utilizing official MagSafe connectors recycled from Apple adapters, but their incorporation into new products was deemed by Apple to be an inappropriate usage.

It is unclear if Apple and Sanho will be able to work out an agreement to allow the MagSafe-compatible HyperMac charging cables to return in the future, but negotiations are clearly underway to at least settle the lawsuit brought by Apple.

Apple's suit had also targeted Sanho for including Apple's USB-to-Dock cable with its external battery battery products for mobile iOS devices, but Sanho has apparently already discontinued that practice, with customers having to rely on their current cables or acquiring new ones from elsewhere.

ShiftyPig
The most ridiculous aspect of this is that Apple doesn't even have a case - exhaustion doctrine says that the patent holder loses any claim to infringement at the first sale of a patented item. If Sanho is buying these things from Apple, there's no infringement.

This may be one of the most embarrassingly arrogant things I've seen Apple do. People can have whatever opinion of products, Apple tax, etc., but using financial might to launch a frivoulous lawsuit against a company who is providing a legitimate product is reprehensible. Good thing we all have removable batteries.... oh :(
Score: 1 Votes (Like | Disagree)

If Apple allowed HyperMac to use the power cords it could open the door for Dell / HP to use them as well.

Never in a million years would that happen. The chargers cost $80 from Apple apiece, Dell's profit margins are ~15% on a $500 computer, or $75. Dell would have to take a $5 loss on each computer sold, just to offer the magsafe adapter, nevermind any R&D costs.

Bum move? Whose device is being sold as though it's their own?

But the first sale doctrine prevents any companies from controlling how their physical product is used, after it is purchased. This is why used bookstores exist, and it is why HyperMac should be allowed to keep doing what they're doing.
Score: 1 Votes (Like | Disagree)

Amuraivel
If they are using 2nd hand connectors, I don't see how Apple can control the technology because Sanho is not manufacturing the product-- just like an author can't control who you sell your copy of their book too.

Just because a product is patented doesn't mean a company has the right to control all downstream uses of that technology when it's not being manufactured.

If this legal doctrine Apple is asserting is allowed to persist IP holders will have a choke hold over the economy.
Score: 1 Votes (Like | Disagree)

Full of Win
What a powerhungy move by Apple CONsumer Electronics. I would understand if they were making the connectors themselves, but they are buying APPLE MADE power AD/DC converters and using these connectors. I'm sure the Kool-aid crowd will overlook this and say how great this is of Apple to keep counterfeits off the market, not even releasing that they were just using Apple made products.

Or they could just pay Apple for a license to use the MagSafe connector. That would be the simplest solution. I'd guess they'll end up doing this after they get their publicity.

They are using original apple MagSafe connectors from power adapters made by Apple. Its not as if they are making a cheap knock-off, and somehow need to license the connector. This is just another example of Apple flexing its massive amount of power and pushing around "the little guy"
Score: 1 Votes (Like | Disagree)
Read All Comments