Forbes reports on a research note from Ticonderoga Securities analyst Brian White, who reveals that he has spoken with a component supplier for Apple's iPad who claims that Apple appears to be poised to ship 45 million iPads next year after moving in excess of 16 million units this year. The predictions exceed even the rosiest expectations published to date and come on top of a report earlier this week predicting the iPad to represent the fourth-largest consumer electronics category in the United States next year behind TVs, smartphones, and notebook computers.

The contact, says White, shipped more than 6 million parts to Apple during the third quarter of the year and expects to ship 7 million more in the fourth quarter.

Since Apple uses one unit of this particular component in each iPad, that adds up to shipments of 13 million iPads in the second half of 2010. For 2011, the contact believes Apple will sell as many as 45 million iPads, adds White. 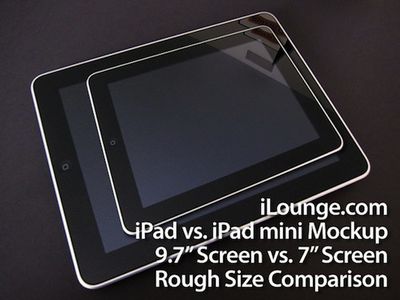 Previous mockup of 7-inch iPad based on current design
White follows on the recent theme of predicting a smaller iPad, but also offers additional details about the specs he believes will make an appearance in the smaller model.

As others have already speculated, White's contact says the second-generation iPad will be smaller, with a screen that measures about seven inches, compared to the first iPad's 9.7-inch screen. The new iPad will also include the high-resolution "Retina" display that the latest version of the iPhone (4) boasts, a micro or mini USB port, a camera and greater capacity of up to 128 gigabytes. The amount of storage in the current generation of iPads tops out at 64 gigabytes.

We believe these listed specs to be rather optimistic, however, given Apple's desire to keep iPad prices relatively low. In particular, a 7-inch high-resolution Retina display would appear to be a challenge for Apple, both in implementation and in pricing. High-resolution displays in dimensions approaching that size are just beginning to appear, but pricing for the new products is unknown and are likely to be rather high for a company that will almost certainly have to bring a 7-inch iPad in at a starting price under the $499 entry-level price for the current iPad.

Sunday June 26, 2022 2:52 pm PDT by Joe Rossignol
Following the launch of Apple's new 13-inch MacBook Pro with the M2 chip, it has been discovered that the $1,299 base model with 256GB of storage has significantly slower SSD read/write speeds compared to the equivalent previous-generation model. YouTube channels such as Max Tech and Created Tech tested the 256GB model with Blackmagic's Disk Speed Test app and found that the SSD's read and...
Read Full Article • 377 comments

Monday June 27, 2022 7:31 am PDT by Joe Rossignol
TSMC will manufacture Apple's upcoming "M2 Pro" and "M3" chips based on its 3nm process, according to Taiwanese industry publication DigiTimes. "Apple reportedly has booked TSMC capacity for its upcoming 3nm M3 and M2 Pro processors," said DigiTimes, in a report focused on competition between chipmakers like TSMC and Samsung to secure 3nm chip orders. As expected, the report said TSMC will...
Read Full Article • 144 comments