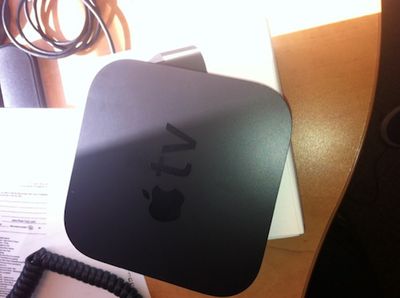 Image via forum member "svega3"
MacRumors readers are beginning to report in our forums that they have received their new Apple TVs today, with a number of others reporting that online tracking is showing their orders out for delivery.

While a few media reviewers have already published their initial impressions of the new device, customers are invited to share their thoughts and questions on the new device in our Apple TV and Home Theater forum.

Those still looking to get their hands on a new Apple TV may have to wait awhile, however, as Apple's online stores are currently quoting shipping estimates of 2-3 weeks. Several forum members have also reported contacting their local Apple retail stores to inquire about availability, only to be told that the stores do not have an estimated date of availability.

Update: Engadget has now posted a thorough review of the new Apple TV, touching on many of its features. The report finds solid video quality and nearly seamless audio integration with other iOS devices, but laments some of the lack of choice in and studio control over available video rental content, as well as awkward text entry using the standard remote.

Also noted is that fact that AirPlay is currently audio-only, even for customers running iOS 4.2 betas on their iPads and hoping to push video to the new device. Full AirPlay implementation won't be available until November, when iOS 4.2 sees its public launch.

Update: We're hearing that some Apple retail stores did receive very limited stocks of the new Apple TV today, but that they sold out very quickly.