iHome and Others to Offer AirPlay Peripherals 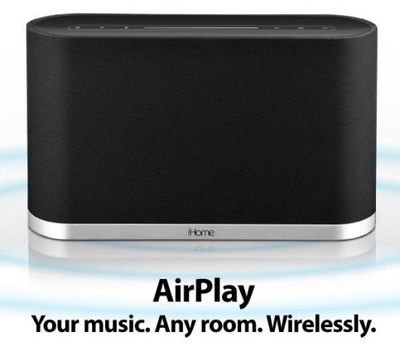 TUAW notes that iHome is the first company to officially announce an AirPlay-compatible product last week. Details are scarce, but iHome posted the above product photo described as "iHome AirPlay wireless speaker system with rechargeable battery." The speaker system will be available for the holiday season and will support Apple's new AirPlay protocol.

AirPlay was announced during the iPod media event and allows you to stream music to your AppleTV or other AirPlay-enabled device. Apple also announced that AirPlay will be integrated into a number of 3rd party speaker docks, AV receivers and stereo systems.

Say you have one set of speakers in your bedroom, one in the office, and one in the living room. For the ultimate sonic panorama, you can stream your tunes to more than one room simultaneously, so youll never lose the beat, no matter where you are in the house.

Wednesday August 10, 2022 4:34 am PDT by Tim Hardwick
In the latest iOS 16 beta, Apple has updated the status bar battery icon on iPhones with Face ID to display the exact percentage remaining rather than just a visual representation of battery level, and while the change has been largely welcomed, some users are unhappy with the way it has been implemented. In iOS 15 and earlier, battery percent has not been present on iPhones that have...
Read Full Article • 250 comments