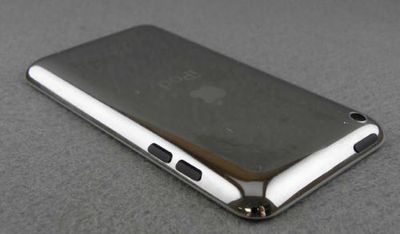 Engadget notes that Apple's new iPod touch introduced yesterday has appeared on the website of the U.S. Federal Communications Commission (FCC). Along with other standard information on radiation emissions required by the FCC for approval, the documents contain a series of internal and external photos of the device, which will not be making its way into the hands of consumers until next week.

Here, the FCC got its greasy paws on the new Retina Display-packing iPod touch, aka "Apple A1367," and in the gallery below you can see exactly where Cupertino keeps that A4 processor, 3.44 watt-hour battery, internal antenna, and 802.11 b/g/n 2.4GHz WiFi.

Engadget's gallery of images from the FCC's site shows how Apple has been able to pack the iPod touch's internals into an increasingly thin form factor now checking in at just 0.28 inches thick. Also included are shots at various stages of disassembly, as well as several individual parts.

We'll likely have to wait until next week for teardown experts like those at iFixit to get their hands on the device and rip it apart to perform complete analyses of the components found inside, but the FCC's photos provide an interesting first look inside the new iPod touch.

Engadget also notes that the FCC has posted documents relating to the new Apple TV, but that photos of the device are not included. According to a letter included with the documentation, Apple has requested confidentiality on such photos for a period of 180 days.
[ 72 comments ]