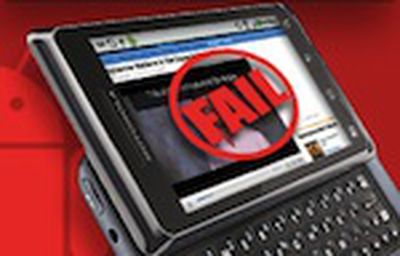 LAPTOP has been evaluating the performance of Adobe's Flash Player 10.1 on a number of different mobile devices, specifically focusing on how the multimedia player handles various content sources on the new Droid 2. With Apple CEO Steve Jobs' open letter published in late April claiming that Adobe had yet to deliver a Flash Player running well on a mobile platform, there has been considerable interest now that Adobe's much-hyped Flash Player 10.1 is finally making its way to platforms such as Google's Android. Based on LAPTOP's experience on the Droid 2, however, much still seems to be lacking.

I'm the last person on earth who wanted to believe Steve Jobs when he told Walt Mossberg at D8 that "Flash has had its day." I took it as nothing more than showmanship when Jobs shared his thoughts on Flash and wrote that "Flash is closed and proprietary, has major technical drawbacks, and doesn't support touch based devices." After spending time playing with Flash Player 10.1 on the new Droid 2, the first Android 2.2 phone to come with the player pre-installed, I'm sad to admit that Steve Jobs was right. Adobe's offering seems like it's too little, too late.

The report notes that some Flash content, particularly sites featured in Adobe's Flash showcase for mobile devices such as the Sony Pictures movie trailers site, does perform very well. But many others, including ABC.com and FOX.com, deliver jerky video and severe system lag and unresponsiveness.

The difference between the smooth Flash trailers on Sony.com, the jerky episode of CSI, and the system-stalling Flash video on Fox.com is that the smoother ones were optimized specifically for phone playback. But if content providers have to go back and optimize their videos for mobile platforms, one of the key benefits of mobile Flash - backward compatibility with millions of existing videos - is lost. If you're modifying your videos anyway, why not go the full monty and use an HTML 5 player instead of Flash?

When it comes to Flash-based games, LAPTOP found that many of the games are still designed for non-touch input, requiring keyboard presses and other actions that are simply not possible in the Flash Player mobile experience as currently implemented. Furthermore, simply attempting to load websites with Flash content resulted in slower loading speeds and even hangs that would make high-profile sites like The New York Times refuse to load.

Over three years after the launch of the original iPhone, it appears that Adobe has yet to find a way to deliver a quality Flash experience on mobile platforms. While the partial functionality Flash Player is currently capable of offering might be of use to some, the numerous performance issues and incompatibilities are certainly unlikely to convince Apple to embrace the technology. And it seems reasonable to assume that the longer it takes Adobe to develop a smoothly-functioning Flash Player for mobile, the more sites will make the transition to HTML5 and other accessible standards, reducing demand for the player.